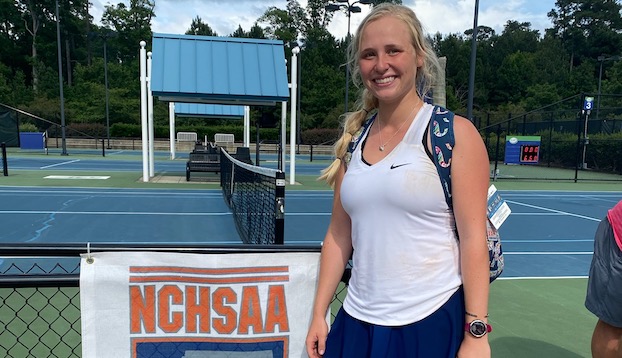 It was the first time a Washington High School girls tennis player made it that far in the state tournament since Natalie Cherry won back-to back championships in 1997 and ’98.

“It was an exciting way to end a really strange senior year,” Holscher said.

“I’m proud that I won two matches and the girl who beat me ended up winning the championship, so I did the best I could.”

She advanced in the winner take all first round with a 6-1, 7-5 victory over her Lake Norman Charter opponent, then battled back from a 6-1 first set loss to defeat Lucy Bovard of Mount Pleasant HS, 7-6 (7-1) and 6-1 to advance to the semifinals.

“There were a lot of long rallies in the first match, which worked in my favor,” Holscher said. “I just tried to hit it deeper and stay focused mentally.

The second girl was really good and hit the ball harder than I was used to.  It took me the first set to adjust, then we had the long second set with the tie breaker. I tried to keep it away from her forehand and place it more accurately. My serve was working and I think my conditioning helped in the last set.”

She lost her opening match last year and was eliminated, but finished this season as the undefeated Eastern Carolina 2A Conference champion and tacked on three more wins in the regional to enter state play 11-0.

Holscher was also the individual conference champion in cross-county and started for the basketball and softball teams.

She took up tennis on a whim after tagging along to practice with a friend her sophomore year and ended up in consecutive state tournaments.

She plans to attend the University of Georgia in the fall.

“I’ve enjoyed playing sports at Washington High and am a little shocked that I did so well in tennis,” Holscher said. “It was a good way to go out and I’m looking forward to college.”