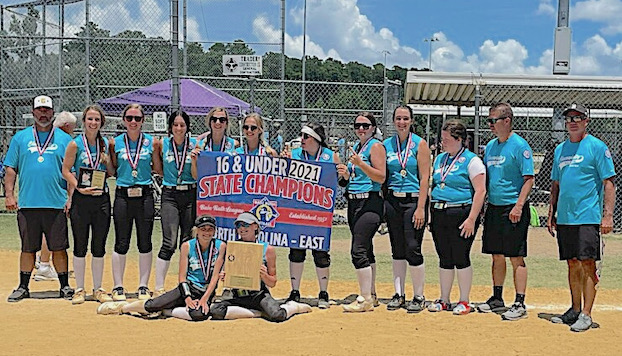 The Chocowinity 16U All-Stars won the Eastern North Carolina State Tournament last week in New Bern. The All-Stars rolled through the field undefeated, winning their seven games by a combined score of 76-10. Pitcher Jaden Clark earned tournament MVP honors for her efforts on the mound.

“I can’t say enough good things about these young ladies played during our regular rec season and this tournament,” head coach Reed Clark said. “Marah Massey is our only 16-year old and she hit her first home run during the tournament. Our pitching and defense was terrific and these girls play for each other and are great friends off the field. My assistants (Rodney Braddy and Jimmy Boykin) did a great job coaching the bases and calling the pitches. It was just awesome to sit back and watch it unfold.”

The All-Stars are in the middle of a fund-raising effort to cover the cost of competing in the Babe Ruth World Series in Treasure Cove/Jensen Beach FL July 18-27.