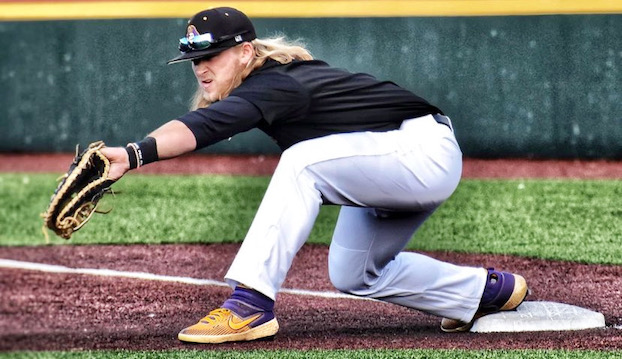 A few weeks prior to Mississippi State’s trophy-hoisting victory in the College World Series championship game in Omaha, the East Carolina club baseball team had a chance to do the same in Pittsburgh, KS.

However, they couldn’t overcome Virginia Tech’s strong pitching and were eliminated in the semi-finals.

“We did well, but it was a little frustrating to come up short against a team we had beaten during our regular season,” head coach and Washington native Ben Fox said. “It was still a fun trip and we did knock off the top seed, so we had some success.”

The Pirates entered the tournament as the eighth seed, but beat Nebraska 2-1 to advance in the double-elimination format. They knocked off fourth seeded North Dakota, 8-2 in the second round, but lost to the Hokies, 9-0 and 10-4.

“We did score as many runs against them as anybody in the tournament and we beat that pitcher during the season,” Fox said. “It was the first time we had to travel that far to play in the World Series and I think we represented our school well.”

The 33-year old Fox played first base and pitched at Washington High School before graduating in 2006. He played one semester of club baseball at ECU before becoming an assistant coach in 2010 and the head coach in 2017. He currently works with young softball and baseball players at Next Level Training Center in Greenville.

Assistant Coach Hatteras Brooks pitched for the Pam Pack before going to North Carolina Wesleyan, then finished his degree at ECU. Brooks was the National Club Baseball Player of the Year in 2016 and helped the Pirates to the national title in 2017.

Current first baseman Cody Godley is the other Washington connection. He played at Guilford College before transferring to complete his degree.

While the varsity Pirates are on scholarship, the club Pirates pay $500 each to be part of the team. The fee covers all travel expenses and uniforms. The varsity Pirates donated a bus a few years ago and give the club team some equipment.

The club Pirates practice twice a week at Guy Smith Stadium in Greenville and hold intersquad scrimmages on the weekends. They also play a fall schedule against community colleges and junior varsity teams from around the state.

“It’s about a 10 hour commitment every week from September to June,” Fox said. “Our guys work hard and one of our pitchers, Tanner Duncan, was drafted by the Astros in 2017. He’s made it to Triple-A and is recovering from arm surgery. This season was more stressful than usual because of all the COVID protocols we had to follow and we can to cram our season into 98 days. It was worth it and I’m looking forward to getting back to normal this fall.”