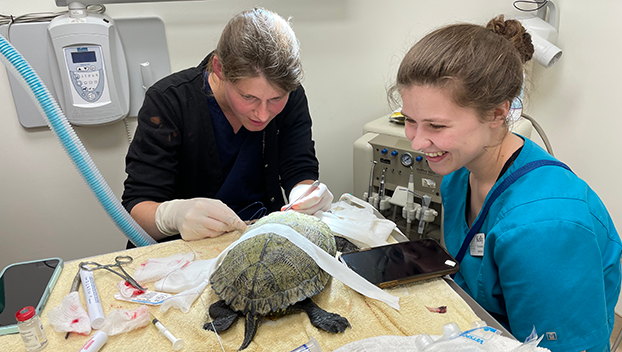 PATIENT FROM THE PAMLICO: Dr. Jennifer Fulp of Pamlico Animal Hospital performed surgery on an injured yellow bellied slider turtle that was found with fishing line wrapped around one of his appendages. His injured leg was amputated and the turtle was released back into the wild by its rescuers. (Photo submitted by Marty Poffenberger)

A resident of the Pamlico River was recently rescued from a dangerous situation by concerned boaters.

“It was a yellow bellied slider. He had fishing line wrapped around one of his flippers and it was just too far gone to save,” said Dr. Marty Poffenberger of Pamlico Animal Hospital.

The turtle was found by the Gardner family in Chocowinity Bay in early June. The animal was brought to Pamlico Animal Hospital and was assessed for injuries where Dr. Jennifer Fulp proceeded with amputating the turtle’s injured leg.

“Dr. Fulp did surgery to save the turtle and she really researched and made sure she knew what to do and how to give this turtle the best quality of life possible. We knew we wanted to release him back in the wild so that was our priority,” Poffenberger said.

According to the North Carolina Wildlife Resources Commission, injured animals are more likely to be aggressive and may pose a threat to you if approached. If an injured animal is found, the NCWRC encourages the person who found the injured animal to contact a licensed wildlife rehabilitator in the area for assistance.

The turtle recuperated under the watchful eye of the veterinarians and employees of Pamlico Animal Hospital for the remainder of June and was released by Scott and Patty Gardner back into the waters of Chocowinity Bay on Thursday.

“We’re really glad the turtle made it and we’re happy that we were able to help him,” Poffenberger said.