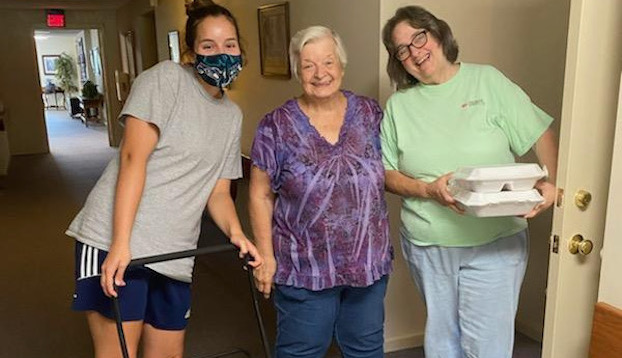 Graduated senior Sarah Petty delivered barbeque plates to residents of Waterford Place in Washington. Petty received the Coaches Award for participating in the volleyball, basketball, soccer and track along with her community service. (Submitted photo)

When the smoke finally cleared on a steamy Saturday at the Chocowinity Volunteer Fire Department, members of the Southside High School athletics department had passed out over 700 plates of barbeque with more to be delivered.

There were some remaining, so Seahawks athletic director Andre Quinerly, soccer coach Jay Petty, wife Tina and daughter Sarah decided to deliver them to residents of the Waterford Place affordable housing complex in Washington.

Tina teaches at Southside, while Sarah received the Coaches Award for her participation in soccer, basketball, volleyball and track in addition to her community service.

Quinerly chalked it up as a win for all involved.

“We wanted to do something nice for people who might not have as much as others do,” he said. “The Petty’s came up with the idea to take the food to Waterford and I was all for it. Those folks don’t get a lot of attention over there and they loved it. It was a surprise to them and they were smiling from ear to ear. Sarah has been a terrific representative of the Seahawks during her career here and we’ll miss her when she goes to Liberty University soon.”

Quinerly said Southside held a barbeque fundraiser for athletics when the school first opened in 2000, but it didn’t last more than a couple of years. With a constant need to replace uniforms and equipment and transportation costs rising, every little bit helps.

“Everything goes into the athletics general fund to help with expenses that always come up, but are not in the budget,” Quinerly said. “We sold over 700 plates, which I consider to be a tremendous success. We’re going to do it again in the spring while the kids are in school so they can help out also.”

An anonymous donor covered the cost of the barbeque, which they served with string beans and potatoes with cake for dessert.

“We started cooking at three a.m. and our coaches and staff worked hard to make this a success,” Quinerly said. I can’t thank them enough for their help and dedication and we appreciate the Chocowinity Fire Department letting us use their space. We hope to build on it and raise even more to help our kids in the spring.”