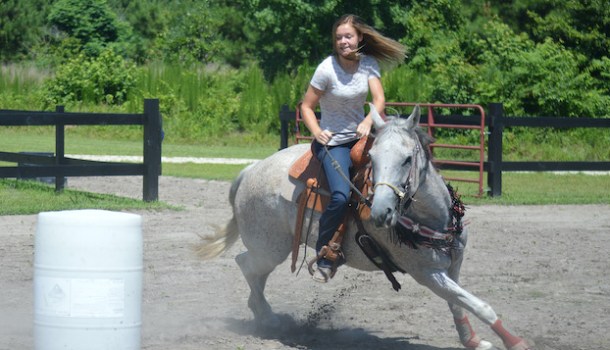 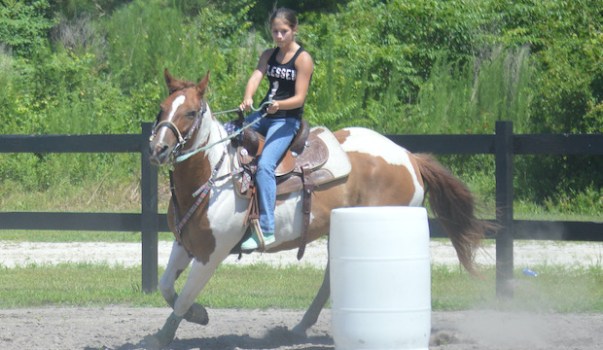 Makenzi Horn trained her horse, Paint Me Proud, to be a barrel racer. Makenzi will make her third appearance at the youth and teen world championship next week in Perry, Ga. (Steve Barnes/Washington Daily News)

There will be more than a few butterflies floating around inside 15-year old Felicity Lynn as she stares down the 60 foot alley awaiting her first ride in the National Barrel Horse Association’s youth and teen world championships.

However, she’ll take comfort in the fact that her horse, Pixie Jay, has been there before and won a championship to boot.

Barrel racing used to be a rodeo event, but has grown into a separate competition. The Georgia National Fairgrounds and Agricenter in Perry, about two hours south of Atlanta, is the host site.

Horse and rider sprint down a 60 foot alley into the main arena to find three barrels set up as a triangle with two barrels in front The rider must guide the horse around the first barrel, then proceed 90 feet across to the second. The third barrel is 105 feet away and it’s another 105 feet back to the finish line. Last year’s winning time was 14.682 seconds.

Felicity’s 13-year old friend and riding partner, Makenzi Horn, rode the 1200 lb. quarter horse to a division title last year and is back for her third straight competition atop Paint Me Proud, a rescue horse that she trained to compete.

The girls story starts with Makenzi’s grandmother, Patricia Everette, who turned her grandfather’s 180 acre tobacco farm in Old Ford into a horse farm after her daughter, Janay, died in an automobile accident six years ago. Janay was 19.

“I was at a loss after it happened, but wanted her memory to live on,” Everette said. “She loved to ride horses, so we cleared about 30 acres, built a house, a barn and a practice arena and opened this place,”

This place would be Nay Nay’s Peace of Heaven, where Everette partners with Beaufort County Animal Control to house and feed horses their owners no longer want.

“We’ve had 25 or 30 come through here since we opened and all have good homes now,” Everette said. “Makenzi started riding when she was three and taught Felicity a year and a half ago and here we are.”

Everette’s daughter, Krista Horn, teaches math at Chocowinity Middle School. Felicity was one of her students and expressed interest in horses, so Horn introduced her to the family passion.

“It took me a couple of months to feel comfortable on a horse and Makenzi showed me how to keep my balance and to communicate with the horse. We practice almost every day and we both really like it. It’s really cool to go that fast on a horse and still stay on.”

The girls have ridden in South Carolina, Virginia, Benson, Fletcher and Lumberton before the state finals in Williamston last month.

“It’s fun to do something not many people do,” Makenzi said. “I’ve ridden most of my life and going to the same place for the third time will help me not be as nervous.”

The local traveling party will leave over the weekend to prepare for Monday’s first round. Close to 500 riders will compete for one of 60 spots in Saturday’s finals.

The fastest times determine placement and hundredths of one second makes a difference.

“It is a 15 second adrenaline rush,” Felicity said. “You have to focus all your attention on guiding your horse around the barrels as fast as she can go. It might sound stressful, but it’s actually a stress reliever to me. Whenever I get mad, I just go for a ride and come back much better.”