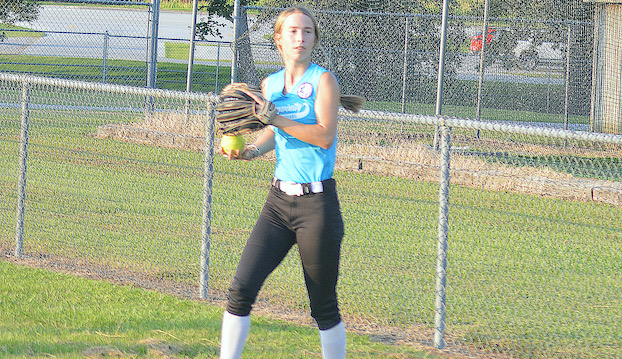 Jaden Clark is one of 11 girls from four different high schools who will compete in the Bath Ruth 16U World Series for the Chocowinity All-Stars. (Steve Barnes/Washington Daily News)

The Chocowinity 16U Babe Ruth softball All-Stars rolled through the regular season, swept the state tournament and are ready to take on the best teams in the country next week in Jensen Beach, Fl.

The All-Stars went 7-1 during a rain-shortened regular season, then outscored their opponents 76-10 in seven state tournament games to clinch a spot in the World Series.

“When we got the last out for the state championship, I thought “Oh wow, we’re going to Florida,” Kelsey Roach said. “We’re excited to see what the competition will be like, but we feel like we can play with anybody.”

Roach pitched and played first base for West Craven HS and joins All-Star teammates from Riverside, Northside and Southside.

“Our location is good for them and it’s neat to have players from different places,” coach Reed Clark said. “They are friends off the field, which really helps our chemistry during games. They like to work and they also like to have fun, which makes them a good group to coach.”

Hannah Black, Bella Boykin, twins Jaden and Jordan Clark and Taylor Willard were part of Northside’s conference championship team that made it to the second round of the state playoffs. Black and Boykin made All-Conference and All-Star assistant Rodney Braddy was the Panthers JV coach.

“Winning the conference title and the state tournament helps our confidence, but we know we have to play our best in Florida,” Black said. “It’s a once in a lifetime experience and we are all super excited.”

The All-Stars will represent the Southeast region in the double elimination tournament, but the pairings and the participating teams had not been made public at press time. The format is double-elimination, but teams will be able to compete in a consolation bracket after they have been eliminated from championship contention.

The teams will play some three inning warm-up games on Tuesday and there will be a military appreciation game with special uniforms before the competition begins on Wednesday.

The All-Stars are built around pitching and defense with speed throughout the batting order.

“Londyn Keech starts things at the top of the order, Jordan Clark hits second and Hannah Black is third. They can all fly,” Clark said. “Bella Boykin and Jaden Clark follow them and we should have a couple of runs on the board by then. Our defense has been outstanding and we work on it every practice. Sam Braddy and Marah Massey are solid at their spots and really everybody contributes something every game.”

“Most of the team pitches, but Bella and Jaden will probably be the top two,” Clark said. “Peyton Lane, Kelsey Roach, Krissy Gurkins, Londyn Keech and Taylor Willard will be out there also. We will enjoy the experience, but we are going down there to win.”