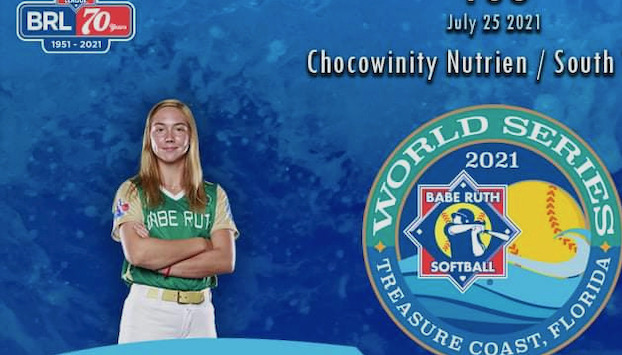 Outfielder-catcher Hannah Black was named to the All-World Series team as the Chocowinity All-Stars lost in the 16U championship game Monday.

The teams met for the third time in the Series and while Chocowinity came closer each time, South Texas prevailed to go through the tournament undefeated.

The All-Stars had runners at first and second with nobody out in the sixth inning, but couldn’t score the go-ahead run, then had another shot an inning later, but also couldn’t get the run home.

After losing to South Texas Sunday, the All-Stars faced elimination Monday morning against the Wisconsin Fastpitch Academy, a team they had beaten three times.

Wisconsin scored four runs in their first at-bat, but Chocowinity came back with three in the bottom of the first. Wisconsin answered with a run in the second for a 5-3 lead, but the All-Stars scored twice in the fifth to tie, then stayed alive in the tournament when Jorden Clark doubled to center field to score Londyn Keech with the winning run.

The All-Stars finished the season 20-4.

Hannah Black led Chocowinity with a .474 batting average, two home runs and nine runs batted in. She was named to the All-World Series team and the All-Defensive team.

Londyn Keech joined Black on the All-Series team with a .450 average, three doubles and 11 runs scored.

Right hander Bella Boykin did not allow an earned run in 17 innings pitched until late in the championship game and struck out 21 batters.