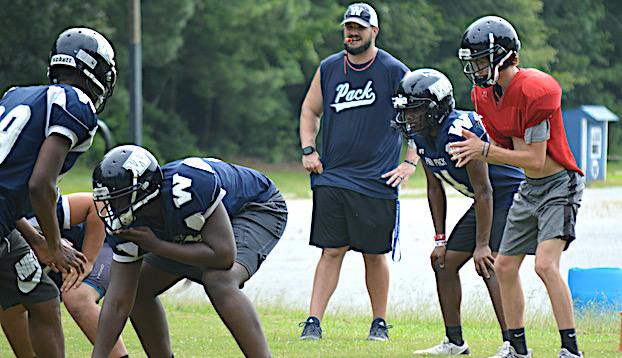 This time last year, Beaufort County’s high school football teams were preparing for a season they weren’t sure they were going to have while trying to limit COVID-19’s spread. Position group workouts with masks, social distancing, sanitizing equipment and daily temperature checks were the norm.

“It’s like getting back on a bike after not riding for a while. We’re glad to be back into a more normal routine,” said coach Perry Owens, who begins his second season as the head coach about three months after his first one ended. “We are more efficient after learning from COVID that we could get more coaching (of fundamentals) in while splitting into smaller groups. The big thing is that we don’t take time on the field for granted. We’ve seen the alternative and want to stay right where we are.”

The Pam Pack is preparing for a new season shortly after completing a 7-2 spring campaign that ended with a loss in the eastern finals, one game away from playing for a state championship.

“We got back to work the first week of June with weightlifting and conditioning,” Owens said. “We lost several seniors who had a huge impact on our program, so the younger guys needed to get in the weight room as soon as they could to continue to build strength.”

The Pam Pack didn’t hold workouts the week of July 4 and this past week because of state association mandated dead periods. This week is the final one for voluntary workouts before formal practice begins Aug. 3.

“These guys will be going at it hard for the next three months straight, so this conditioning and film work time was very important,” Owens said. “You can’t be out on the practice field every day during the summer because they’ll get tired of it and burn out, so we’ve mixed it up quite a bit. They’re a little wet behind the ears, but have worked hard and made great progress. One positive thing about playing in the spring is that they don’t have six months between seasons to forget everything.”

Tailback Terry Moore returns for his senior season after rushing for 1,472 yards and nine touchdowns during the nine-game spring season. Moore accepted a scholarship offer from Duke University earlier this month.

Senior quarterback Hayes Pippin will be back under center with some new faces on the offensive line.

The season starts Aug. 20 at home against Pamlico County.