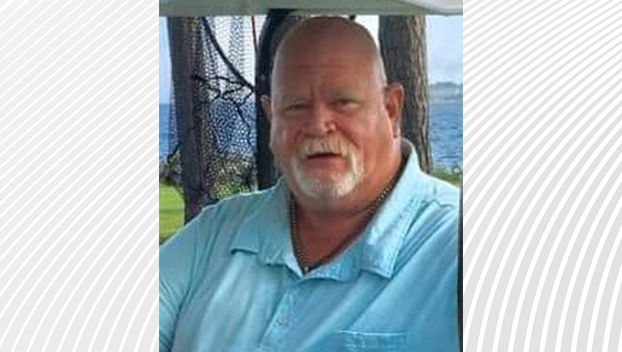 Ted Bradford Overton passed away peacefully on July 23, 2021 surrounded by family following an extended illness.  The fourth of five sons of Charlie (CJ) and Janie Hardy Overton, he was born in Washington, NC.  When he was 2 years old his family moved from Aurora to Edenton and in 1969 to Raleigh where he graduated from Broughton High School, before accepting a scholarship and playing football at Elon University.  Ted married Cathy Brinegar and they moved to Wadesboro where Ted took his first coaching job.  In September 1980, they were blessed with a fine young baby boy, Brad Overton born in Laurinburg.

In 1985 Ted moved back to his hometown of Aurora as Athletic Director, football, and baseball coach, and taught PE and health. He truly loved working with students and athletes and it seemed the feeling was mutual.  By all accounts Ted was firm but fair and would do anything he could to help you be a better you.  He enjoyed coaching and was especially proud of his girls’ volleyball team that won the Eastern Region Championship.  While teaching and coaching in Aurora, Ted attended classes at East Carolina and received his Master’s Degree in Administration.  He served as Assistant Principal at Aurora High School until students were transferred to the new South Side High.  He then served as Assistant Principal of Aurora Middle and in 2004 became Principal of Aurora Middle School for two years.  In 2007 he became Assistant Principal at Chocowinity Middle School until his retirement.

Ted’s biggest love was family.  He was proud to watch Brad grow, play sports and graduate from Aurora High School.  His mama Janie and daddy CJ had retired and were back in Aurora by then and he was able to be a tremendous help to them as well.  He also loved the Pamlico River where he purchased a home in the early eighties at a little place called Jarvis Landing.  Ted was a tremendous fisherman.  He would set nets when the days were long enough after school and take Brad along with him.  In the summers the two of them fished for crabs for many years.  By the time they stopped, they were fishing 600 pots a day, but then Ted went at everything he did “full tilt”.

More than fishing kept him at Jarvis Landing.  He loved the people he met there and became almost a “fixture” at the river.  He was known as “Big O” which not only refers to his physical presence, but the size of his heart.  Ted loved hunting from an early age, as did all of his brothers.  Having hunted many places, he decided the best place to hunt was right there in the Campbells Creek area.  Like his daddy CJ he served some time as president of the hunting club.  Whereas he and family loved all kinds of hunting, the best years were when he and Dan Windley, (Mr. D), raised beagles and ran deer near home.  His brothers, nephews, Brad and friends spent many special days in the field.

Never one to be idle, after fishing Ted decided to keep Jarvis Landing mowed up and looking good.  He did a heck of a job of just that.  For many years, when you roll in on the weekend, it has looked great.  There was nothing lazy about the man.  He would mow the majority of the yards and visit on his golf cart every afternoon with his neighbors to see how they were doing, catch them up on what fish were biting, and ask if they needed help.  He pulled in many broken down craft, helped get many restarted, and made sure they were safe.  Albeit cliché, if needed he would give you the shirt off of his back, and if BIG O did you would have a blanket.  He, Mr.D and Miss Ann Windley began the Jarvis Landing fish fry 28 years ago to share the river’s bounty with all.  Craig and Peggy (Windley) May continue that tradition today.  He hated to leave the river for most any reason, including hurricanes.  He and four others almost pushed that to the limit during Irene.  She took 90 percent of the homes including Ted’s and almost put the entire place in depression.  As it turned out, a shared love and resilience have led to rebuilding of the Landing including his brothers and nieces.  His care for his fellow man and love for friends and family were instrumental in the resurgence.  His sense of humor was infectious.  He once told his nephew who was slight of build and tall, “are those your legs Jimmie or are you riding a chicken”.  He was a character, but one of the best kind.  He is and will be greatly missed by friends and family.

His family expanded when Brad married Susan and they gave him Lauren.  She was his eyeball from the day she was born.  He nicknamed her “Boog”, and he so loved to see her any chance he had.  She has grown so quickly and he was so proud of her playing softball and enjoyed every pitch and every smile.

Visitation will be at Paul Funeral Home from 6-8 PM Tuesday July 27, and the service will be held at 11 AM Wednesday July 28.

Arrangements are by Paul Funeral Home in Washington, North Carolina.