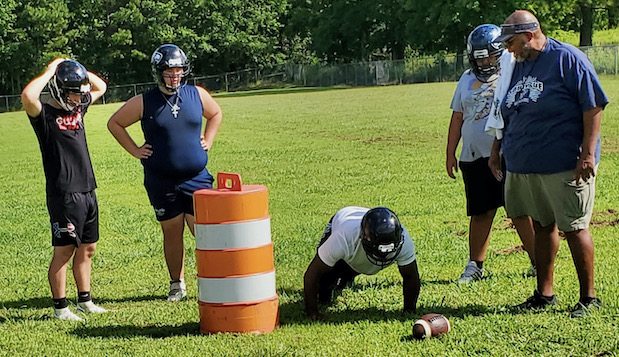 The Beaufort County football jamboree is back, another signal that the high school sports world is returning to normal. Southside High School will host the event Wednesday, Aug. 11 at 6:30 p.m.

The pre-season scrimmage features Washington, Northside and the host Seahawks along with Jones Senior, Dixon, Spring Creek, South Creek and an opponent to be named.

Historically, Northside and Southside have rotated the event, but Washington is in the mix as a future host.

The teams played at Northside in 2019, after the game at Southside was rained out in 2018, so this year marks the first time in five years that the Seahawks will host.

“It’s great to have it back on our field,” coach Jeff Carrow said. “It’s a fundraiser for our program and it will be fun to see what different teams run and actually get out on the field under normal circumstances.”

A team will run 10 offensive plays, then switch to defense against the same opponent, with both sides of the field being uses at the same time. The offense will get the ball on the opponent’s 40 yard-line and see how many times they can score with their 10 plays.

“It’s a good test for us because we’ll everything from the spread to the option to the Wing T to the pro set,” Carrow said. “It helps us get into a game-day flow and we have a chance to iron out some things before the season starts.”

Four teams will be on the field at the same time, with four watching and resting. Carrow plans on each team playing four opponents during the jamboree, but his Seahawks won’t face the Panthers.

“We like to save that for when it counts,” he said smiling. “It’s easier for both of us to prepare for the season if we don’t have to face each other in a scrimmage.”

The Seahawks started voluntary workouts in June, three to four days a week in the weight room and on the field, trying to improve on a 3-4 COVID-19 delayed and disrupted spring season.

Junior Walker Hill is slated to take over for Hundley Stallings, who graduated and will play at Missouri Valley (Mo.) College this fall.

“It’s nice to get back to coaching football instead of coaching around COVID,” Carrow said. “I expect 35-40 guys on Monday when official practice starts and we’ve had consistently good turnout this summer. Walker and the rest of the guys have worked hard and made good progress.”

The COVID after affects include not fielding a junior varsity team because participation numbers are still below pre-COVID standards.

“The situation with the younger kids worries me a little,” Carrow said. “We didn’t have our kids here on campus so we could see them every day and the middle school didn’t have a season. Hopefully, we’ll see a few more younger guys on Monday.”

Southside opens the season August 20 at home against North Duplin.