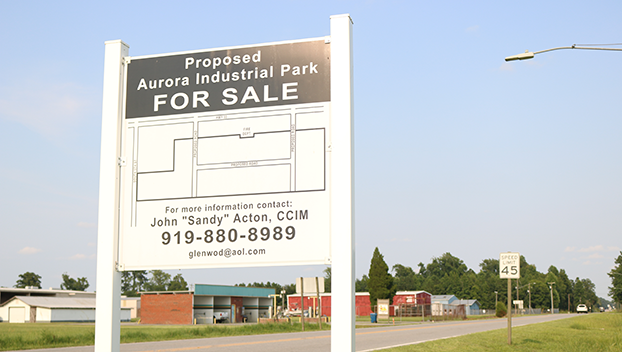 Development of the Aurora Industrial Park is moving forward, according to Mayor Clif Williams.

“We’ve had a very productive meeting with Nutrien and we’re just waiting for their response,” Williams said. “For the Industrial Park, we have a grant from the state through the Golden Leaf Foundation and the Department of Commerce to do the infrastructure.”

The industrial park project has been in the works since 2019. Development of the project was delayed due to the COVID-19 pandemic and the town is working toward a public announcement regarding the status of the project.

“It is aimed at businesses that wish to be in the Aurora area and it’s open to contractors. We’re also hoping that it will have a satellite Beaufort County Community College facility. It’s not only for people who have jobs with the contractors or nutrient but also to help the citizens there gain enough educational training to apply for jobs with the contractors or Nutrien,” said Martyn Johnson, team leader with the Beaufort County Economic Development team.

The planned industrial park will comprise 41 acres or more of space for new and existing businesses and contractors to come to the area. The town estimates the park will provide at least 20 full time positions for new employees.

“It would add 50% to the tax base when it’s completed and it could also encourage new development as well so we’re hoping for a big boom in Aurora,” Johnson said.

The planned site for the Industrial Plant is located along N.C. Highway 33 near the Richland Township Fire and Rescue department.

“There are a lot of things getting ready to happen in Aurora and we’re very excited about what’s coming,” Williams said.