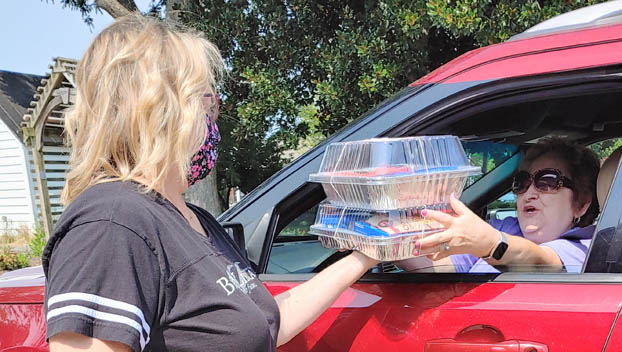 Technical Services Specialist Elizabeth Tankard delivers a bundle of "pick-up kits" featured during this year's summer library program at the George H. and Laura E. Brown Library. The program was so popular that the pick-up kits will continue to be distributed on a monthly basis. (Karen Thiel)

Almost two-dozen parents and children recently found out that Friday was not their last opportunity to enjoy the benefits of this year’s Virtual Summer Library Program at the George H. and Laura E. Brown Library.

The season’s popular weekly take-home crafting kits will continue to be distributed on a monthly basis, according to library staff members who said that nobody – participants or organizers – wanted it to end.

“My grandkids have enjoyed their pick-up kits. I even enjoy them,” said Maria Galloway of Bath, who has arrived early every week since June 25, when the summer program began a tailored version of its offerings from the previous year. Online options included virtual story times, craft lessons, sing-alongs, nature walk videos, a cookbook club, and a reading contest. “Story Time With Mr. Terry” is still an online favorite, but those kits stole the show. Children’s themes included several categories of animal life, while teen and adult kits offered more advanced crafting projects.

Technical Services Specialist Elizabeth Tankard said last week that the teenagers’ kits were so popular that they routinely ran out “almost immediately, in the first five minutes today … at least two dozen of them. We didn’t anticipate the response we got this summer, not to this extent. It has been wonderful.”

Galloway said it’s been so busy since June that she and other drivers were routinely backed up to the street while about two-dozen others waited at the library door. “We’ve all enjoyed the projects we got to make,” said Galloway, a 71-year-old who picks up three teen kits for her grandchildren and two adult kits for herself and Lisa Davenport, her daughter. An occupational therapy assistant, Davenport said the positive effects of those kits have spread beyond her immediate family because she couldn’t limit the benefits to her family members.

“I picked up a couple of kits for the children I see work with, kids with disabilities, and while they were having a great time with the activities they were also improving their fine motor skills,” Davenport said. “I’m definitely going to tell their parents that this program is continuing.”

This year’s effort was held in collaboration with Washington’s Department of Parks and Recreation.

“The library couldn’t have their book sale and we still had all our programming money, several thousand dollars, so we just gave them ours,” said Events and Facilities Supervisor Teresa Hamilton. “This city really does have a wonderful group of employees who are very service minded. Everybody works together.”

Distribution dates and other details regarding the monthly take-home kits can be found on line at the library’s Facebook page.