Demons return to the gridiron after a year away 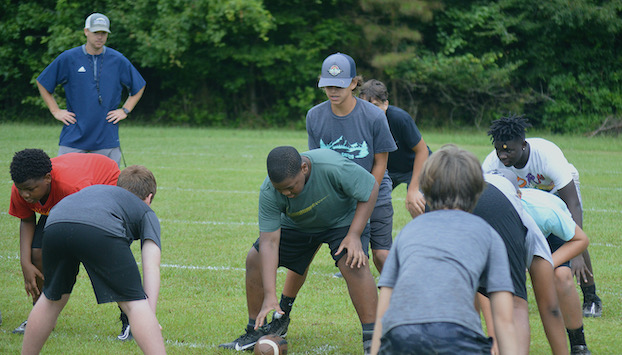 “We don’t know who our quarterback is yet, but we know he’s not Peyton Manning,” Cutler said. “I have no favorites; every position is open and I want players who will hustle and do their best to help us win.”

It’s a fresh start and a learning process for all the Demons football players and their head coach as well.

None of the Beaufort County middle schools played fall sports in 2020 because of COVID-19, including P.S. Jones, who is part of the Pitt County Conference.

The team is made up of seventh and eighth-graders, so everybody was new to the program when conditioning drills started last week.

“It’s really strange to not have any experienced players, but at least everybody starts on the same page,” Cutler said. “I was an assistant before COVID and missed it tremendously last fall and I know the kids did also.”

Cutler expects between 30-35 players for Monday’s first day of tryouts, but said the final number won’t be set until school starts later in the month.

“Some of these kids depend on the school bus to get them here and back home, so I expect a few more to be on the team soon,” he said. “Conditioning and walking through plays has gone well, but it will be fun to put on the pads next week. I have some guys who are itching to get back to it.”

Cutler expects 20 8th-graders to form the core of the team, with Brody Cahoon and Calek Smaw in the offensive backfield and on defense as well.

The last time most of the Demons suited up was in the Washington Youth Football League in 2019, so Cutler has started with the basics.

“Everyone is learning together, but the down side is that there are no older guys to show the younger ones where to go,” Cutler, a Washington native and Northside graduate, said. “We’ve improved since we started and hopefully, that will continue.”

The Demons will play in a Jamboree scrimmage Sept. 2 at A.G. Cox Middle School in Greenville, before the eight-game regular season starts Sept. 9. All games will be played on Thursday, which is a switch from Wednesday in previous years.

“It’s a big jump from rec league without playing last year, but everybody is in the same situation,” Cutler said. “We are the feeder program for the Pam Pack and our job is to get the eighth-graders ready for them next year. Getting to play football again gives them something to look forward to after their academic day is over and holds them accountable in the classroom, because they know they can’t play if they don’t do their work. We’re very excited to be back on the field and look forward to our season.”