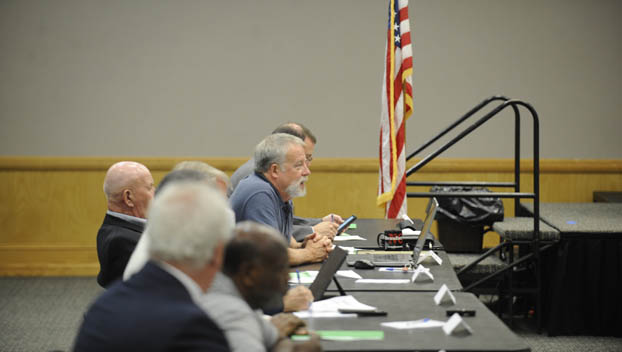 Beaufort County Commissioner Stan Deatherage asks a question during a joint meeting between the county commissioners and the Beaufort County Schools Board of Education in May. (Brandon Tester / Washington Daily News)

The Beaufort County Commissioners this week approved a contract with CivicPlus to redesign and host the county’s website, but Commissioner Stan Deatherage — whose company, Symbiotic Networks, is currently responsible for the website’s hosting and design — isn’t through investigating whether the county’s decision to not allow his company to place a bid on the new contract was justified.

Deatherage’s company was awarded the current contract prior to his re-election as county commissioner. County Manager Brian Alligood said the county was obligated to complete the terms of that contract even after Deatherage was re-elected. In October 2020, the commissioners voted 6-0 to publish a request for proposals to issue for a new five-year contract, and Symbiotic Networks submitted a bid. But after the county consulted with the UNC School of Government, County Attorney David Francisco advised the county that it would be illegal for Deatherage to participate in the bidding process due to a conflict of interest.

“This is a play with the attorney and with you guys on getting me out of it, and bringing in this play of, ‘because we bid it out, you’re finished now,’” Deatherage told the other commissioners. “And I think that’s a pretty sorry way to get rid of a Beaufort County citizen who’s given you the best service you’ve ever had on a website.

“So, if that’s what you want to do — if you want to be known for that and make this a political issue, which you are doing, we’re going to find out just how big a conflict it is when we go to the attorney general’s office. So we do have the opinion now from our attorney — or your attorney, not mine — and we’ll find out what it is. And I will report — maybe not back to you, because you guys are completely unconcerned —but I will completely report on this.”

Deatherage and Commissioner Hood Richardson have advocated for the county to keep Deatherage’s company under contract under contract on the grounds that his company is local, and that the company, in their opinion, has done well in developing and maintaining the site and therefore they see no reason to move on to a new company.

Deatherage has also cited an exemption included in state law; Francisco said that particular exemption doesn’t apply in this case, but did not comment further. According to state law, “No public officer or employee who is involved in making or administering a contract on behalf of a public agency may derive a direct benefit from the contract except as provided in this section, or as otherwise allowed by law.” That law doesn’t apply to an elected official of a county in which there is no village, town or city with a population of more than 15,000 according to the most recent federal census. The population of the county’s seat, Washington, was approximately 9,744 as of the 2010 census.

There are several stipulations listed for those who qualify for the exemption. For example, a contract between a county and one of its officials for good or services other than medically related services cannot exceed $40,000 within a 12-month period. The official cannot vote on that contract.