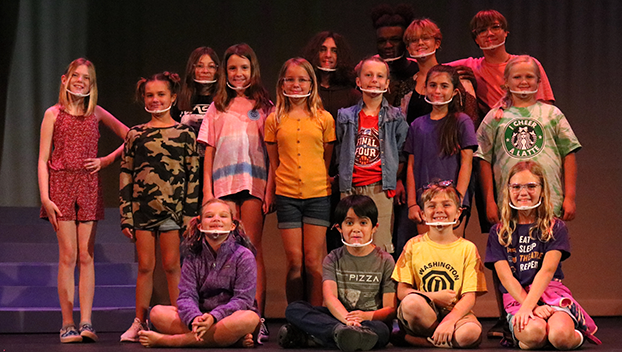 FROZEN JR. CAST: The students in Arts of the Pamlico’s Broadway Kids Camp will be putting on a production of Frozen Jr. on August 14. Tickets will be available at the door for $5 cash or $6 with a credit card. (Chelsea Hofmann / Washington Daily News)

Arts of the Pamlico’s Broadway Kids summer camp will be performing a production of “Frozen Jr.” this weekend.

14 children ages 6 through 17 are participating in the camp and production, which will be AOP’s second stage show since the COVID-19 pandemic began in March of 2020. Director Rachel Issac has experience directing children of all ages from her experience as director of previous Broadway Teen and Broadway Kids camps in addition to being the theater teacher at D.H. Conley High School.

“It’s been a little bit more difficult to make sure that all of them are staying safe and keeping their masks on,” Issac said. “Today was their first time practicing with the clear masks and with regular masks, they always want to pull them down when they’re on stage. We want to make sure that they’re staying safe and that everyone feels comfortable and safe while they’re performing.”

AOP’s Broadway Kids camp began during the first week of August with auditions. After the cast list was announced, the children had two short weeks to learn the songs, dialogue and blocking before the group started to run through the show on stage.

“The process is always harder with the younger ones because we only have three weeks to put an entire production together,” Issac said. “I was really thankful this year that I have nine teen interns that volunteered their time to help me. A lot of them are my students and some are from the area. I took a step back from directing and let each of my interns direct a scene in Frozen. It’s been interesting and challenging since they don’t have experience directing and they get that chance to direct and teach children and work with them.”

Many of the teen interns were previously involved in AOP’s Broadway Teens camp, which put on a production of “Mamma Mia” earlier this summer.

Two shows will occur this weekend on Saturday, Aug. 14. A matinee performance will be held at 1:30 p.m. in addition to an evening performance at 7:30 p.m. that night. Tickets will be available for purchase at the theatre and will cost $5 in cash or $6 if using a credit card.