From Bear to Bulldog-Hale heads to Barton 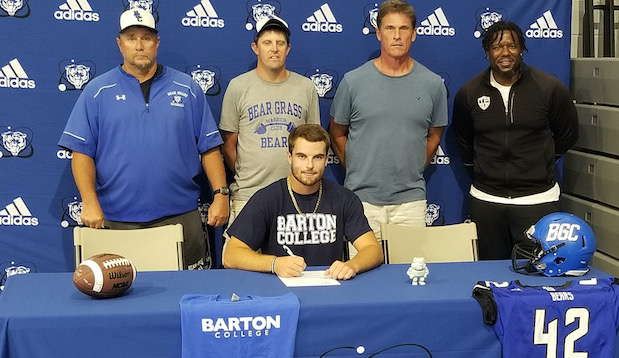 Logan Hale has experience in helping lay a successful foundation in a new sport in high school. He’ll try to replicate that as a member of the Barton College football Bulldogs.

Hale was part of the first four-year class to play football at Bear Grass Charter in Martin County and will be on the field later this week for pre-season workouts for a Barton squad who played a shortened version of their first season this spring.

“That was part of the attraction,” Hale said. “Everything is new there and will be neat to get in on the ground floor like I did at Bear Grass. The stadium is new, the weight room is new and they have all new equipment. I loved the coaches enthusiasm about the future on my visit and am excited to get started.”

The Bears made steady progress under veteran coach Brian Paschal and ended the COVID-19 delayed spring season a step away from playing Northside for the 1A East championship. Bear Grass finished the campaign 4-2 with a 42-22 loss at Northampton County.

Hale, whose family is from Washington, was part of the Washington Youth Football League’s 10U Redskins that won the 2012 Super Bowl. He played middle linebacker and fullback in high school, but will be shifted to wing back at Barton.

He also played basketball and baseball at Bear Grass and thought baseball would be his collegiate sport. However, Paschal started building the football program his freshman year and Hale slowly shifted gears.

“I never thought about playing football in college, but his (Paschal’s) passion for football and the weight room rubbed off on me,” Hale said. “He got me to love the grind of working out and practicing to get better and here I am.”

Hale, with Paschal’s help, sent out game film to several schools and was considering North Carolina Wesleyan and Brevard before the Bulldogs won him over.

“Logan was a super coachable player on the field and in the weight room,” Paschal, who will coach at Riverside this fall, said. “He was a leader and excelled as a two-way player. He and Jameson Perry were a dynamic linebacker combination and led a super dedicated and talented once in a lifetime senior class. Those seniors took the Bear Grass program to new heights and set a high bar for future teams. I’m really proud that he gets to continue his career at Barton.”

“High school football went much better than I expected,” Hale said. “We were the first freshman class to make it all the way through and we pushed each other to get better. It turned out great and hopefully it will at Barton as well.”