Homecoming: DieDra Ruff to take the stage at Summer Festival 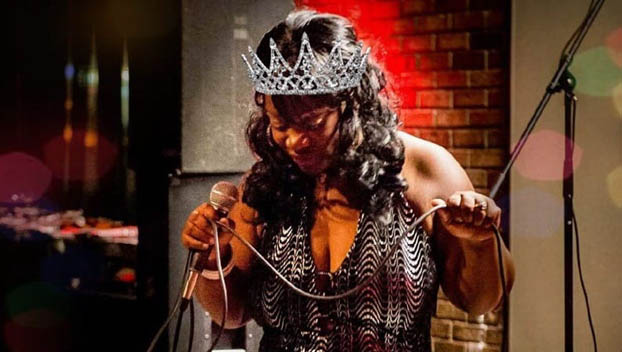 DieDra Ruff, pictured on the cover of her recent CD, “Alabama’s Blues Queen,” is set to perform at the Washington Summer Festival. (Courtesy of DieDra Ruff)

DieDra Ruff may be known as “The Alabama Blues Queen,” but she calls Washington home.

So when the opportunity arose to take the stage at this year’s Washington Summer Festival, Ruff wasted no time planning out her 11-hour drive from Alabama to Beaufort County.

“I lived there from 8 months old to the eighth grade,” Ruff said. “My whole family is there. So I’m rooted and grounded in Little Washington.”

The blues musician heads home whenever she gets a chance, but this trip is different than the others. When her group DieDra and the Ruff Pro Band takes the stage on Aug, 28, it’ll represent another small step toward normalcy after the COVID-19 pandemic halted most live performances. It’ll also be her first chance to play in honor of Mac Hodges, Washington’s late mayor whom she shared a special bond with.

She said not having the beloved mayor in the crowd will take some getting used to.

“Me and Mayor Hodges were very close,” Ruff said. “It’s going to have a different kind of feel. Because if I would come home and I would perform at the bar, he would come.

“He had to speak at the high school one day,” Ruff recalled. “He came and got (my husband and I), set us on the panel with him while he spoke to the audience — he just loved us. It’ll just be different. I haven’t been home since he passed away.”

It was in Washington that Ruff first discovered her love for music. Her father, Joseph Tucker, was the organist at Davenport Temple Church of God in Christ. He started a small family singing group with Ruff and several others.

“I guess because I was the little feisty one he put me out in the front,” Ruff said. “And that’s pretty much how I started singing. And then he taught me a little bit about how to play the piano and stuff like that. He wrote all of our songs, so I learned how to write songs.”

Ruff continued to develop her skills as a singer-songwriter, influenced by the works of Aretha Franklin, Whitney Houston and Patti Labelle. Today, her band sticks to the blues genre — primarily blues rock and soul blues. Her shows generally include a mix of covers and original pieces.

“We try to make sure that we have something that everyone in the audience can relate to,” Ruff said.

Ruff was actually an R&B singer earlier in her career before meeting her husband, Keith Ruff, who performed for 20 years with Grammy Award-winning blues musicial Bobby Rush.

“That one actually ended up in California being considered for a Grammy,” Ruff said.

She still remembers the night she received a call from the Memphis-based Blues Foundation, informing her that she was in contention for the major music award.

“Needless to say I got no sleep that night,” she said with a laugh.

Music isn’t the only thing Ruff is working on. She’s also preparing to produce a film, “Frenemy for Life,” which will be filmed in Alabama.

Ruff said she’s looking forward to reuniting with her friends and family and telling them more about her accolades, both on screen and in front of the microphone.