Sailing in memory of Mayor Hodges 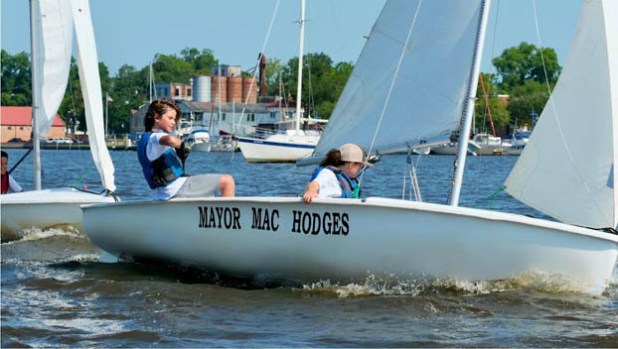 First place winners Patrick Thienpoint of Washington, at left, and Holly Anglemyer of Chocowinity, took first place at this year's regatta. The fact that they won the competition in a boat named after Mayor Mac Hodges brought happy exclamations from the crowd. (Mark Woolard) 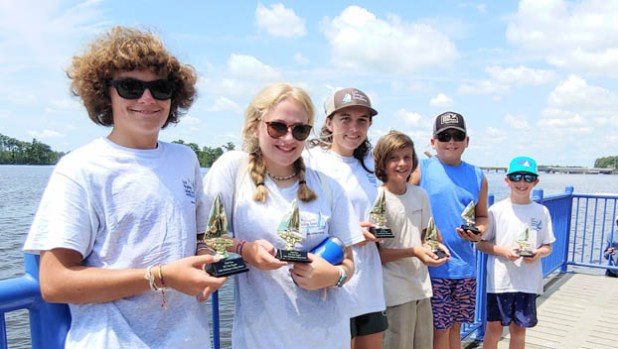 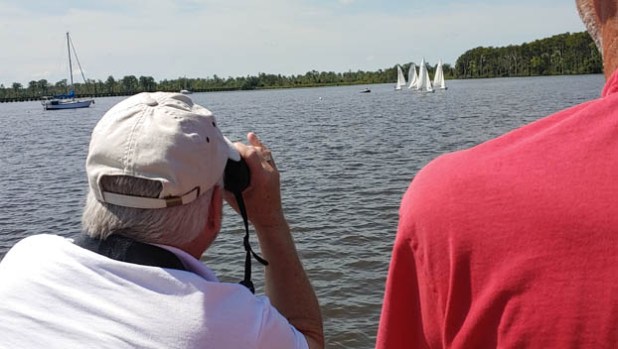 A CLOSER LOOK: Sailing School president David Norwood, at left, is joined by Michael Jahn of Washington, whose son Rainor was competing in the regatta. Norwood's binoculars got lots of use last Saturday, this time during a tie-breaker race — one of three that day between students whose positions were too close to call. (Karen Thiel) 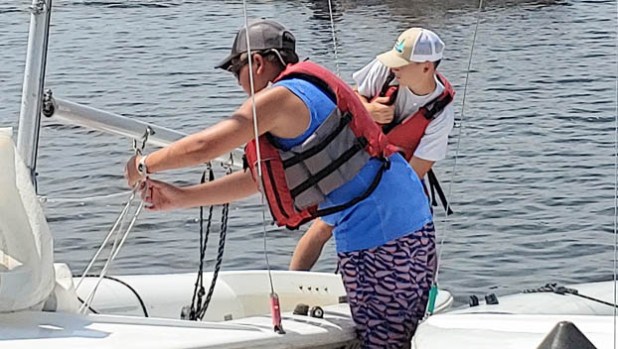 PREPARATION: Dawson Rouse, at the bow, and Liam Parisi, at the stern, made sure everything was ship-shape before leaving the sailboat they used during the regatta, where they took second place in the competition. (Karen Thiel)

Twelve motivated students made their families and instructors proud as the Little Washington Sailing School kicked off its second decade of regattas Saturday.

This year’s regatta was dedicated to Mac Hodges, Washington’s beloved mayor who died last year from complications of COVID-19.

“The ‘Bear’ Regatta” offered several types of races, lots of team spirit, and a feeling among organizers and parents alike that Hodges was watching over them.

“Mac is smiling… he’s looking down on this,” said Lou Hodges, the late mayor’s wife, who joined sailing school founders, staff and board members for the event.

“That’s why we’ve had this great wind,” said sailing school president David Norwood, who told attendees that Mac Hodges “has always been our biggest supporter. We wouldn’t have this pier if it wasn’t for Mac.”

The regatta is the highlight of several weeks of training. Up to 20 teenage students “learn the basics of sailing including knots, wind direction, rigging and de-rigging their boats and more, as well as many off-water skills such as decision making, self awareness, and team building,” said lead instructor Kelli Cooper, who also learned how to sail at the school. “Then we choose the top 12 based on skill and ability, to handle our advanced week and compete in the regattas,” she said.

This year’s event ramped up when organizers had to add three tiebreaker races because the young sailors were competing so well.

“It looks like the Olympics,” Lou Hodges said, as members of the race committee huddled to make a decision about which teams would get those spots.

“This is pretty exciting stuff for sailing,” said Michael Jahn of Washington, whose son Rainor has been sailing “since he was in a car seat” and competed on Saturday.

Trophies went to the top three teams, based on who made the fewest mistakes while sailing school staff watched from several vantage points on the river. Jenna Levine of Greenville took special honors, winning this year’s Kent Fulton achievement award for “her five years of steady progress, many volunteer hours served this summer, and her potential to move her way up to be an instructor one day,” Cooper said. Levine also placed third in the race with team member Caleb Thrift of Washington. Liam Parisi and Dawson Rouse, both of Washington earned second-place honors. First place honors went to Patrick Thienpoint of Washington and Holly Anglemyer of Chocowinity.

“It was a perfect ending,” Cooper said of the fact that Thienpoint and Anglemyer won this year’s regatta in the 14-foot Vanguard 420 sailboat that, along with the regatta, was recently named for Hodges. “He always watched out for us. We will always remember him and have him with us.”