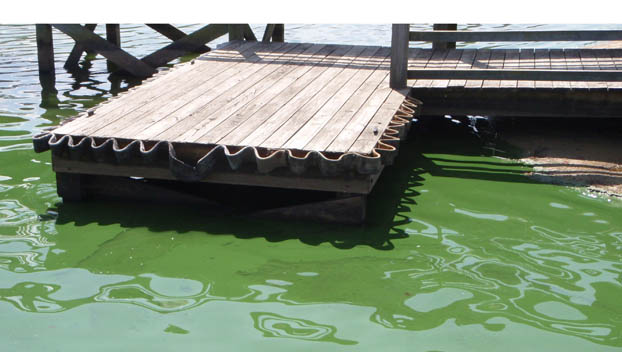 This photo from the DEQ shows an example of an algal bloom.

The North Carolina Department of Environmental Quality is investigating a fish kill On the Pamlico River, between Durham Creek and South Creek.

Pamlico-Tar Riverkeeper Jill Howell said Sound Rivers started receiving reports about the fish kill last week. Croaker, flounder and crabs have been mentioned in those reports. The amount of fish affected is unknown.

Howell mentioned several factors that contributed to the fish kill.

“Algae blooms and fish kills are the result of excess nutrients ending up in the waterways, and some of the major contributors are stormwater runoff, runoff from industrial animal agriculture operations and sanitary sewer overflows,” Howell said.

“We often see algae blooms and fish kills happening this time of year,” she added. “In the summer and early fall, when temperatures are really high, the waters are warmer. Just because we’re seeing these year after year at the same time doesn’t mean they’re normal, or that these things should be happening. It’s a sign that waters are in distress. There are too many nutrients, and the warmer temperatures push everything over the edge.”

Sound Rivers advises anyone who sees an algae bloom or fish kill to stay out of the water in that area. Fish kills can be reported to Sound Rivers, or they can be reported directly to the DEQ using this shortened link: https://bit.ly/3k542Gi.

“A lot of times they’ll wash up in one spot, or if you’re out on the water there will be a lot of them floating. Another telltale sign is a lot of birds will flock to an area to feed on the dead fish,” she said.