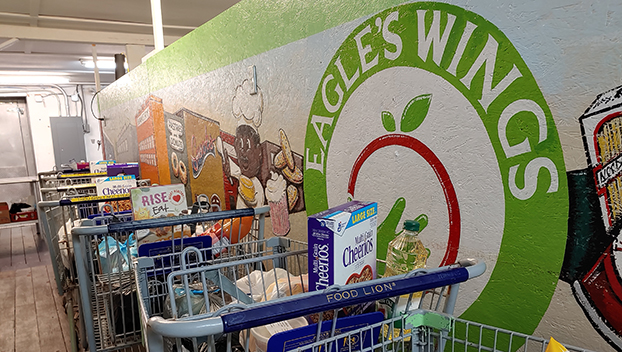 Large food banks — particularly those in more urban areas — have seen spikes in demand for their services over the past year, but food banks and pantries in Beaufort County aren’t experiencing similar trends.

Local food bank and pantry officials stressed that while the county continues to navigate the pandemic, the number of people using their services is tied more to the county’s economic state than the pandemic.

Eagle’s Wings Executive Director Ann-Marie Montague talked about the impact of the county’s economy on people using the center’s services and resources.

“We have had very few people who use our center’s resources who actually lost their jobs as a result of the pandemic,” Montague said. “Unfortunately, Beaufort County did not have a lot of high-paying jobs to lose to begin with.”

Montague said the government’s use of child tax credit money for families has also played into the lack of impact on Eagle’s Wings, adding that she is concerned about what people will do when they’re no longer receiving that money.

“It makes me worried,” she said. “We’re trying to encourage these families to still use us and the money that they have to pay off bills, rather than spending it now. The government has stepped in to help low income individuals and that is wonderful. It shows the government has done this to assist people. We are preparing ourselves, though. We know that because many people are using that money now, people will be returning to us.”

Martha’s Thrift Store and Food Pantry Executive Director Mildred Bowman shared some of Montague’s thoughts as she talked about the impact of the pandemic on her Belhaven-based facility.

“We have not really seen an increase in the number of people who come get food from us,” said Bowman. “I think in my view, it’s a combination of factors. Some people are afraid to go out because of the pandemic and some feel like they don’t need to. People getting that child tax money also plays into it, I think.”

According to the most recent information available from the NC Department of Commerce, Beaufort County’s unemployment rate was 4.8% in June, down approximately 2.6% from June 2020.

“If you look at our sales tax, which is a general indication of the county’s economic state, we’ve seen a strong and large increase in our sales tax,” Beaufort County Manager Brian Alligood said. “What we contribute that to is the diversity in businesses in Beaufort County. That’s not to say there weren’t some areas that got hit really badly by the pandemic. There were some businesses that got hit really badly, but overall due to the diversity in our businesses, the economy has continued to do very well.

“As I understand it we have a lot of jobs that are open, such as boat makers and restaurants,” Alligood added. “They have signs encouraging people to apply. There is a strong job market in Beaufort County. I don’t know why folks are not returning to the market.”

Eagle’s Wings and Martha’s each get their food through the Food Bank of the Albemarle. According to Brian Gray, Food Bank of the Albemarle Communications and Volunteer Manager, the agency’s food distribution to its 15-county region has increased 45% between March 2020 and 2021. That is approximately 10 million pounds across its service region, with approximately 1.7 million tons of that food being fresh produce.

Gray said that despite the ongoing impact of the pandemic, the organization, which receives grant funding through the Vidant Health Foundation, is still able to provide resources for agencies in its service area, including Beaufort County.

“We are distributing more food than ever across our service area,” said Gray. “We do our best to gauge the needs for the agencies that we work with, but we rely on our partner agencies to provide us with that information. If we are getting reports back that show an increased need then we will do what we can. Even if the pandemic continues though, and the need increases, I don’t think it would put anymore strain on us. We always look for any grant opportunity. If we see that there is funding available through any resource, we would apply for that grant.”

Bowman was just as positive about being able to provide food for those who use Martha’s resources.

“We are a thrift store here,” she said. “The money that we get from items we sell, we use to buy our food from the Food Bank of the Albemarle, and that money goes to those who come to use our distribution service.”