Panthers plan for normal season and beyond 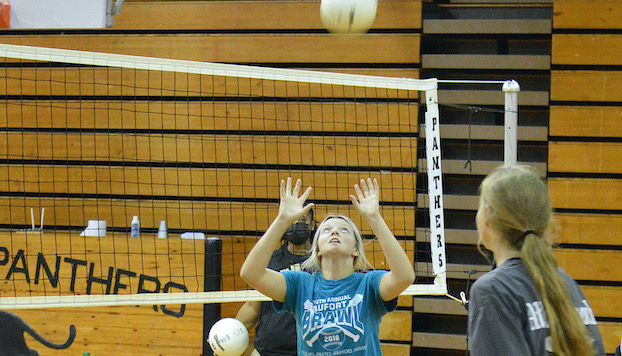 Senior setter Paige Sawyer is one of the captains for the 2021 season. (Steve Barnes/Washington Daily News)

Paige Sawyer wasn’t sure what she was getting into when she stepped through the doors of Northside High School last fall.

It was more like a virtual door for the Unity Christian transfer as the public school year started online because of COIVD-19.

Sawyer was a multi-sport standout at Unity and wanted to test herself against a higher level of competition, but she couldn’t get started right away.

The pandemic pushed the volleyball season to a mid-November start, about the time things were usually wrapping up. There was also overlap with basketball, which made things a bit complicated at times.

“It was kind of crazy coming to public school for the first time without knowing what to expect and having to play two sports basically at once,” Sawyer said. “My teammates made me feel comfortable when practice finally started and I started to settle down a little bit. This year, it feels totally normal, like this is home and my teammates are like family.”

Head coach Michelle Leathers begins her sixth year in charge of a group who made it to the first round of the 1A playoffs before losing to East Carteret, who will be in their conference for the next four years.

The Panthers are looking for their eighth consecutive trip to the playoffs and Leathers is counting on a mix of newcomers and experienced players to make it happen.

“Our offense runs through Paige,” Leathers said. “As a setter, she had to put the ball where our attackers want it so they can finish the point. Shyanne Buck (a 6’3 Unity transfer) will help us with that and we have some others in that spot as well.”

The 2020 COVID-delayed season turned into a seven-week, 14 game sprint with a week off for Christmas in the middle. Leathers, who also coaches basketball, was bouncing from sport to sport for most of that time.

“It’s nice to just have one sport to concentrate on,” she said. “The players don’t have to wear masks, yet anyway, and we’ve had time over the summer to get to know each other. We’ve had a steady stream of younger players join us the last few years and we are in more of a reload mode than having to rebuild.”

Senior Averi Marselender is the only one to be part of the program all four years. She said it will be hard to leave, but having a successful season will make it easier.

“We want to go out with a bang,” she said. “We’ve worked almost since school got out in June and we are excited to get started. Coach has taught me a lot and helped me grow up, so I want to go as far as we can.

The Panthers season-opener against Washington Tuesday ended after the print edition deadline. Go to thewasingtondailynews.com for coverage.