National Night Out brings community together 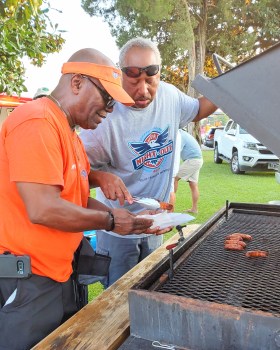 DOGS AND BURGERS Mayor Donald R. Sadler, at right, got some help at the grill during National Night Out at Beebe Park. His assistant is riding buddy Jeffrey White, who is treasurer of the "95 East Touring" motorcycle group based in Washington, which Sadler often leads on his own motorcycle. (Karen Thiel) 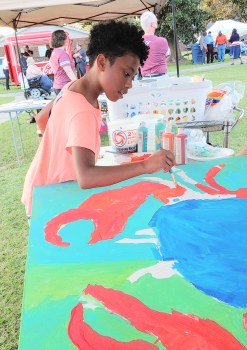 BUDDING ARTIST: 8-year-old Ivy Carter got a chance to be creative at the booth sponsored by Washington's Department of Parks and Recreation, during this year's National Night Out held at Beebe Park. (Karen Thiel)

At one end of Beebe Park, youth crowded around a huge poster with the outline of a typical Pamlico River crab, waiting their turn to add paint. At the other end, a giggling pack of kids screamed and hopped while trying to beat Sheriff’s Office deputies in several potato sack races. Somewhere in between, Washington Police officers handed out watermelon slices while Mayor Donald Sadler teamed up with Jeffrey White, treasurer of the “95 East Touring” motorcycle group, to cook hot dogs and burgers for anyone who showed up hungry.

Those are the images that local youth and adults took in last week during National Night Out, held nationwide since 1984 and in Washington since the mid-1990s. The event combines the efforts of local law enforcement agencies, neighborhood watch groups, crime prevention associations, and a host of community service outreaches in an effort to enhance the relationship between neighbors and law enforcement and enrich a true sense of community.

Several food vendors gave away their best temptations while local service groups and town department heads handed out information and smiles.  Participating groups filled more than a dozen tents with goodies for the kids and pamphlets for anyone interested. Some of those groups included Trillium Health Resources, Bright Futures Foundation, Beaufort County Human Relations Council,  and Eagles Wings Food Bank. At the Parks and Recreation Department’s booth, that huge crab paint-a-thon drew enthusiastic youngsters and their parents, who then migrated to book-filled tables at the neighboring booth run by employees of the George H. and Laura E. Brown Library.

“They come every year,” said Washington Police Chief Stacy Drakeford, adding that community participation in this event was enthusiastic, from both the givers and those who wanted the information offered. “I think it went very well, considering that it was postponed for weather and we are living in this pandemic situation.”

The crowd at the two-hour event was estimated to be between 200 and 300 people at any given time, Drakeford said.

Drakeford, who has been chief for the last nine years, added that he is always “very grateful for the ones who show up to support our community. All our nonprofit organizations support each other whenever we have an event, which is very good for the city. Everybody comes out to sponsor or to participate. That means our community is working to try to make itself better and help everyone to be successful in everything they do.  Any time we can get the citizens in this city to get together for event where kids are having a great time, that’s an excellent event.”