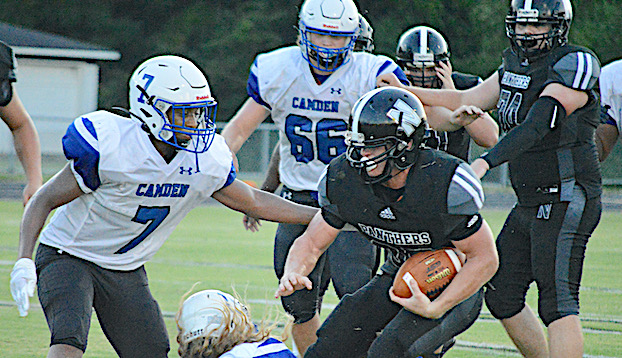 Northside opened the fall season with an almost perfect offensive performance in a 56-21 pummeling of Camden County Thursday night at Bing Mitchell Field. Click HERE to watch video highlights from the game.

The game was moved from Friday because of the threat of rain. It rained points instead of drops Thursday as the Panthers scored on eight of nine possessions and didn’t punt until the games final minute.

Seven different Panthers scored the eight touchdowns, all on the ground, as Northside rolled up 482 rushing yards.

“We just took what they gave us,” Northside coach Keith Boyd said. “Our offensive line did a good job of clearing holes and our backs ran through them. I’m very pleased with our offense tonight.”

Senior fullback Mitch Godley rumbled for 173 yards and a pair of touchdowns on 15 carries to lead the way.

“Mitch just pounded his way down the field behind our line,” Boyd said. “He’s going to be a big key for us offensively, but we showed tonight that one guy doesn’t carry us.”

Newcomer Fortino Beltran scored the new season’s first touchdown on a five yard sweep that capped a 13 play 85-yard drive that set the tone for the evening. The senior transferred after a stellar junior season at Pungo Christian Academy and saw action on both sides of the ball Thursday.

Johnson scooped up a fumbled punt and ran it in from 28 yards out to make it 49-13 late in the third quarter.

“We did a lot of good things on offensive and it’s great to get a big win at home to start the season,” Boyd said. “We need to keep working on our conditioning and we had some defensive breakdowns that we have to correct.”