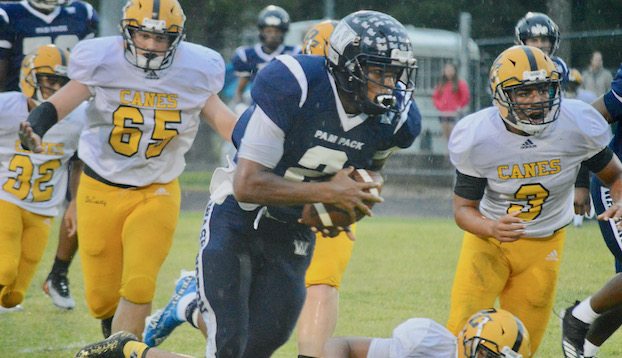 Washington High School overcame the elements, their opponent and themselves for a 62-20 opening-night victory over Pamlico County Friday night at J.G. “Choppy” Wagner Stadium.

The scheduled 6:30 kickoff didn’t happen until 7:15 because of pre-game thunder and the potential for lightening.

As a light, but persistent rain fell, the Pam Pack struck quickly as senior quarterback Hayes Pippin found classmate Ryan Spruill for a 50-yard touchdown pass on the first play from scrimmage.

After the Hurricanes went three and out, senior Terry Moore broke two tackles near the line of scrimmage, then burst through the left side for a 59-yard scoring run on the Pack’s third offensive play for a 14-0 lead.

“Our playmakers played to our standard when we created favorable matchups,” coach Perry Owens said. “Our offense is very capable of putting points on the board and we needed them all tonight.”

Spruill intercepted a Pamlico pass early in the second quarter to set up Moore’s 29-yard touchdown run for a 21-0 lead and it looked like the rout was on.

Yet another Moore scoring run, this one for 14 yards, put the Pack ahead 27-6 with four minutes left in the first half.

As WHS was ready to snap the ball after the kickoff, the stadium lights went out, causing a 50-minute delay.

Once play resumed, Pippin threw an interception on the first play and the Hurricanes converted to climb back to within seven points, 27-20, at halftime.

“We are an immature football team and it showed during that stretch,” Owens said. “We couldn’t get out of our own way for a while, but managed to in the third quarter.”

The teams took a one minute halftime break followed by the usual three minute warm-up period before the Hurricanes took the ball.

Washington forced a punt and Moore raced around the left side on a 41-yard scamper for his fourth TD and a 33-20 advantage.

That started a string of four WHS touchdowns in six and half minutes that sealed the win.

Pippin scored on a 10-yard run, Jonathan Richardson found paydirt from 30 yards and Kentari Gibbs-Leathers blasted up the middle for a 52-yard jaunt for a 54-20 lead after three quarters.

Pippin hit Messiah Ebron for a five-yard score to set the final at 62-20.

Moore had close to 200 yards rushing on the night as the Pack gained over 450 yards of total offense.

Jonathan Carter added two interceptions that led to a pair of touchdowns.

“I’m pleased with the adjustments our younger guys made throughout the game and I thought they took coaching really well,” Owens said. “Gabe Davis played very well at linebacker and Carter had those two picks. I’m happy with the win, but unhappy that we continue to be our own worst enemy at some point during a game.”