A bittersweet goodbye: Schmitt’s to close after 32 years 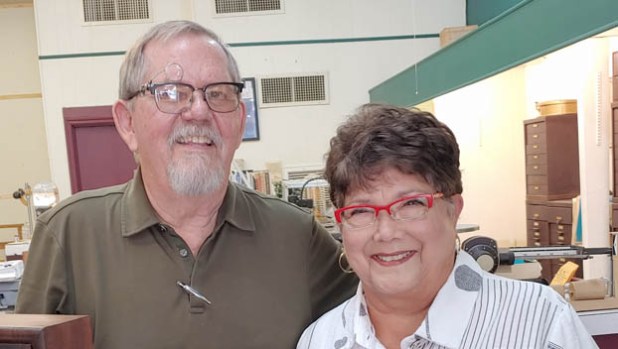 TIME TESTED: Roddy and Ruth Schmitt say that their rock-solid marriage has brought them through rough waters and allowed them to see the fruits of their labors for almost 50 years. (Karen Thiel) 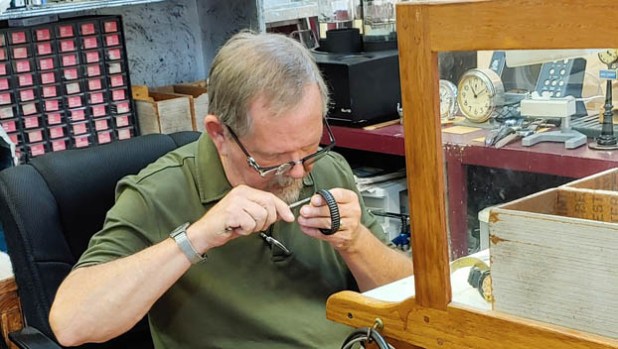 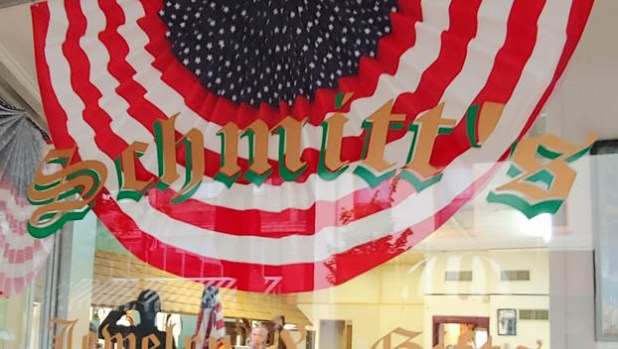 PATRIOTISM: Bunting at the store's window and front door has made it plain as day that Roddy Schmitt loves his country as well as his customers. (Karen Thiel) 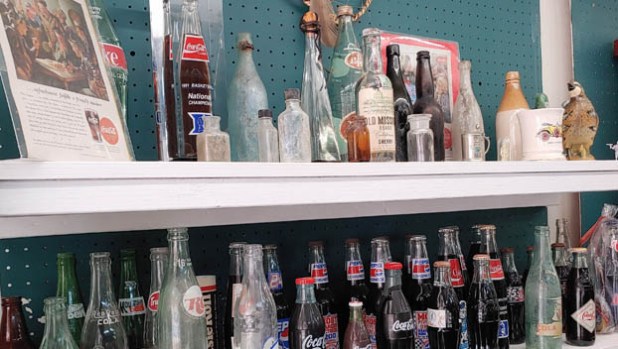 TREASURES: Schmitt's taste in collectibles became popular among his customers, who often arrived to pick up a watch or piece of jewelry while holding something they saw at a yard sale or auction and thought the multifaceted store owner might like. (Karen Thiel)

There may be more room on the shelves at Schmitt’s Jewelry and Gifts this week, but storeowners Roddy and Ruth Schmitt say their hearts are fuller than ever.

Main Street shoppers were surprised when signs recently appeared in the store’s windows, notifying them that the business, which has been at that location for 32 years, will close at the end of August.

“I started telling my clients about two months ago,” said Roddy Schmitt, who has received tearful well-wishes from people as far away as Europe, where one customer has sent his beloved clocks to Washington ever since moving to Germany, steadfastly refusing to allow anyone but Roddy to touch his time pieces.

“We’ve been very blessed,” said Ruth Schmitt, who is as quiet as her husband about the 47 years they have been married, and the “gobs of friends… and memories” they’ve treasured since the two of them were simply “the little kids.”

That tightly knit relationship has seen them through some difficult family times – about which they are very private. Sharing space in that building on Main Street has kept them even closer. Ruth ran “The Beauty Parlor” at the back of Roddy’s storefront space for about 20 years, while he greeted customers with a quiet smile and customer service ethic dating back to his high school job at Swindell’s Jewelers. “I was supposed to work for Mr. Swindell after watchmaking school but I got drafted, and when I got home the store had been sold,” he said.

The Schmitts haven’t moved far from Washington since Roddy returned from Vietnam.

“We are small town folks,” he said. “When we went into business, we were told to just rent a building and put out a shingle. About a week later a friend of Ruth’s who worked at the tax office called to say we needed a license. A lot of things have changed since then, but our sheriffs still shake the doors – and sometimes call to tell me I haven’t pulled them shut.”

Longtime customer Loretta Jones-Atkins says Main Street won’t be the same when those doors get locked on Aug. 31.

“I’ve trusted Roddy with inexpensive stuff and high dollar stuff. He’s taken pieces that were nothing and made them beautiful,” she said, adding that she is one of “probably thousands of us who just want them to enjoy their retirement to the fullest, because they’ve given every day of their lives to the residents of Beaufort County. Now it’s their turn to enjoy life.”

Ruth says she and Roddy have a head start.

“When you’ve lived in the same town all your life,” she said, “you have friends, history and, even in change, you know where and in whom there is safety and security… friends, family and faith.”