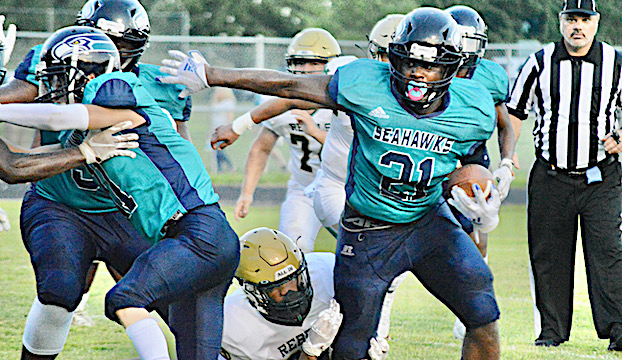 Senior Keywon Campbell scooped up a fumble and returned it 35 yards for a touchdown in Southside’s 32-0 victory over North Duplin Monday. (Steve Barnes/Washington Daily News)

Southside’s defense came up with a shutout for the first time in 26 games and converted two North Duplin turnovers into touchdowns for a 32-0 season-opening victory on a muggy Monday night at Seahawks Stadium.

The last time Southside left the field with a goose egg on the opponents side of the scoreboard was August 31, 2018 in a 47-0 home rout of Perquimins.

“Our defense bent, but it didn’t break,” coach Jeff Carrow said. “North Duplin had a drive going on the first series, but we stopped them on fourth down in our own territory and they didn’t get much the rest of the night.”

The Seahawks took over at their 25 after the stop and big runs from Tequon Moore (25 yards) and Kenjray Coffield (20 yards) set up Moore’s five-yard scoring dash midway through the first quarter.

Senior linebacker Keywon Campbell came up with the first defensive score on the next series when he recovered a Rebel fumble and ran it in from 35 yards out for a 16-0 halftime advantage.

“He made a big play at the right time, which is what we’ve been missing for a while,” Carrow said. “After the spring season didn’t go the way we wanted it to, those guys bought into what we were trying to do, especially on defense. It showed tonight.”

After a scoreless third quarter, Southside marched 52 yards to make it 24-0 on Coffield’s 20-yard run to set up Moore’s three-yard touchdown run.

The Seahawks sealed the win on the next play from scrimmage as Coffield stepped in front of the North Duplin running back to grab the quarterback’s pitch out of the air and sprint 44 yards into the endzone to make it 32-0.

“I didn’t see it since it was on the far side of the field, but I know it was a heck of a play,” Carrow said. “We count on those guys to make big plays for us and they did tonight.”

The Monday contest occurred because North Duplin had a COVID-19 case and couldn’t play last Friday. That means a short week for the Seahawks to prepare for Friday’s contest at Washington County.

“We’ll celebrate this win tonight and focus on Washington County Tuesday in practice,” Carrow said. “It will be a big challenge, but our summer work paid off tonight and we should be ready to go Friday.”