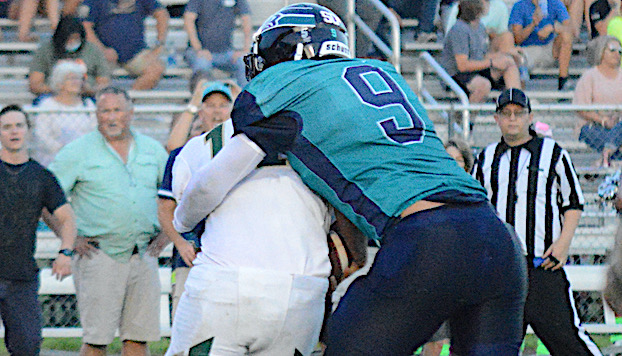 The first Friday night of the high school football season spanned Thursday to Monday thanks to the threat of bad weather and COIVD-19 issues. All three public school teams won at home, while Pungo Christian was rained out. Here are this weeks’ top performances:

Honorable Mention: Northside: Marcus Clayton ran for 95 yards and a touchdown on five carries. Chase Tomaini made all eight extra point attempts; Terry Columbus had a sack and Keifer Boyd intercepted a pass.

Southside: Keywon Campbell scooped up a North Duplin fumble and returned it 35 yards for a touchdown. Kenjray Coffield intercepted a pitch-out and took it 43 yards for a score. He also ran for 77 yards on 10 carries.

Tequon (Tater) Moore led the Seahawks with 122 yards on nine carries with two touchdowns. Jamie Corprew led the defense with 5.5 tackles and a sack.

Washington: Quarterback Hayes Pippin was 10-14 for 125 yards with two touchdowns and an interception. Kentari Gibbs-Leathers ran for 86 yards and a touchdown. Koby Munday led the defense with 11.5 tackles, including two for loss. Freshman Gabe Davis had 8.5 tackles, while Austin Waters had three tackles for loss. Chris Carter had two interceptions and Ryan Spruill had one. Dawson Mitchell blocked a punt and recovered a fumble.

All three teams are on the road Friday. Northside is at North Duplin, Southside visits Washington County and Washington travels to First Flight.