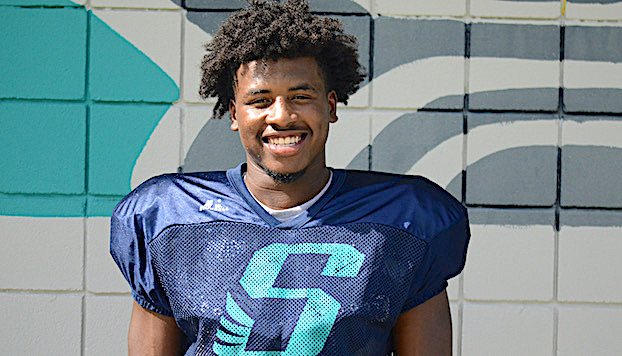 Keywon Campbell helped the Southside defense to its first shutout since 2018 Monday night against North Duplin. He’s a linebacker/fullback who has played football and basketball at Southside since his freshman year.

His 35-yard fumble return gave the Seahawks a 16-0 lead in the first quarter.

Keywon: The intensity and energy we brought on defense. I think the defense set the tone by stopping North Duplin early and we played really well.

Keywon: I knew I had to focus on securing the ball first, but I also knew there was nothing but green between me and the endzone. Once I had control of the ball, it was a great feeling because I knew I was going to score.

Keywon: My mom because she is a hard worker. I try to be as well because I learned it from her. I know she wants the best for me, so I need to work hard to make it happen.

Keywon: I lived in Aurora until we moved to Chocowinity for high school, so I started in the West Craven rec league when I was 13 or 14. I wasn’t into football when I was younger. I liked basketball better, but I got a sack in a rec game and that’s when football started to be fun.

Keywon: I’ve always liked baseball, but I know it’s not my sport. I like watching the Yankees play.