‘These masks are bad for our children’: speakers criticize BCS mask mandate 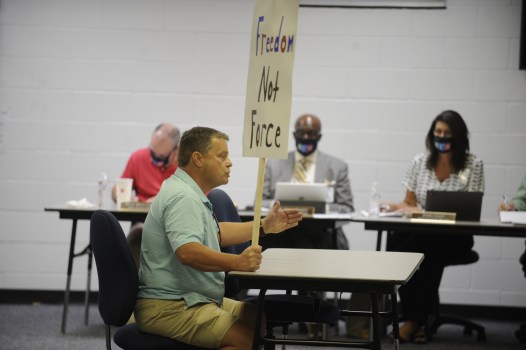 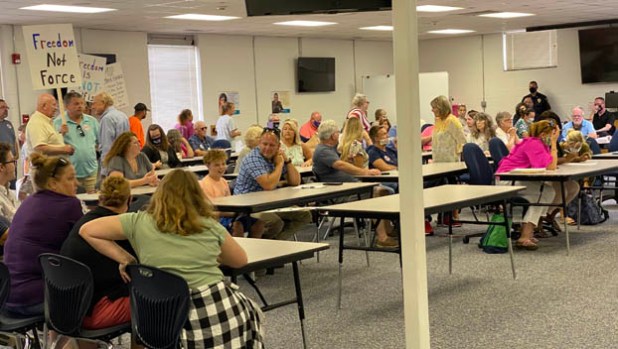 The room was full during the school board meeting Tuesday. It filled in even more after this photo was taken. (Brandon Tester / Washington Daily News) 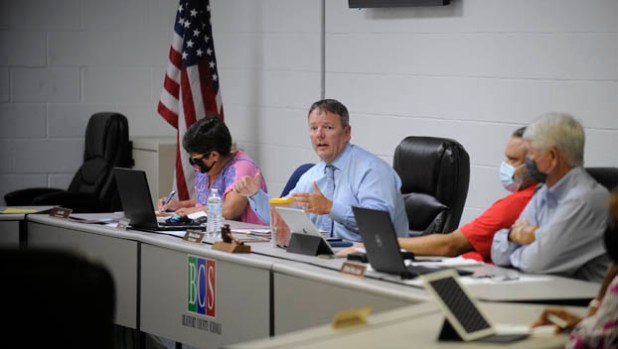 A standing-room-only crowd filled the room during the Beaufort County Schools Board of Education meeting Tuesday night. Some held up signs protesting the board’s recent decision to reverse course and require masks for students and staff. Many of them wore stickers protesting critical race theory. Some held up signs — one saying Freedom not force,” one saying “Freedom is not selfish” and another listing the names of the school board members who voted for the mask mandate.

Before the public comment period, BCS Superintendent Matthew Cheeseman reminded the school board why he made the recommendation to require masks. He emphasized that a letter from Gov. Roy Cooper and other state officials didn’t prompt the recommendation; rather, it was brought about by the need to keep students in classrooms as much as possible by utilizing the StrongSchoolsNC Public Health Toolkit, as well as guidance from the Beaufort County Health Department.

The school board approved the mask mandate on Aug. 18; the first day of class for all of the school system’s traditional schools was Aug. 23, but Beaufort County Early College High School started classes Aug. 4.

Cheeseman said when he presented his recommendation to the board, six Early College students had tested positive for COVID-19 and 72 had been quarantined a week and a half into the new school year.

“I came back looking at that toolkit recognizing that if we stayed optional, in a scenario of students in a room, where community members have consistently asked to keep our kids in school, I looked at what those scenarios would look like,” Cheeseman said. “In the optional mask opportunity, if you had ‘student A’ who was unmasked and ‘student B’ who was masked, and ‘A’ tests positive and ‘B’ was close, then B goes home for 14 days, where the ‘A’ who’s tested positive goes home for 10. So in that circumstance they both go home. Anyone specifically within that area would also have to quarantine.

“With the mask mandate, looking at the NC StrongSchools toolkit, if all students are masked and student ‘A,’ who is masked, tests positive, all the other students who were properly masked get to remain. Therefore, a situation like (Monday) at Washington High School, where four different classrooms each had one student test positive, because all four classrooms had students appropriately wearing their masks, only those four students had to go home.”

As of Tuesday, the Early College — which is housed on the Beaufort County Community College campus — had recorded seven positive cases, and 77 students had been sent home.

“Part of that is they’re functioning under the CDC guidance, where the community college is greater than the K-12 toolkit,” Cheeseman said.

As of Tuesday, there were 37 COVID-19 cases within the BCS system and 153 close contacts associated with those cases.

School board policy restricts the amount of speakers in a public comment session to four people per agenda item, with each person getting three minutes to speak. The school board agreed to allow two additional people to speak about the mask mandate Tuesday.

Comments from Adam O’Neal, former mayor of Belhaven, garnered the loudest reaction from the crowd.

“What I always hate to see is a politician hiding behind a new rule,” O’Neal said. “We’re in a situation where we know those masks are bad for our children — 100%, we know they are bad. There’s carbon dioxide that the kids are breathing that’s bad for them. Anybody that took a high school biology class knows that that mask being worn is a great (place) to grow bacteria. … You all are our local elected representatives. You don’t represent Gov. Cooper; you represent us. It’s time for you to stand up and do what’s right. And if you have to fight with Raleigh, you fight with Raleigh. You fight for our kids.”

Other speakers brought up similar concerns about masks and questioned their effectiveness in general, referencing stories about their personal health and pointing to various studies. Carson Hasty said that the school system should either provide M95 masks for everyone to use or not require masks, based on effectiveness. He also referenced the toll lockdowns have on mental health, adding that mask mandates could have similar detrimental effects.

“What is the answer to keeping our kids that have masks on from getting COVID when the masks don’t seem to be working?” Jay Jones asked.