A weekend of entertainment at the Summer Festival 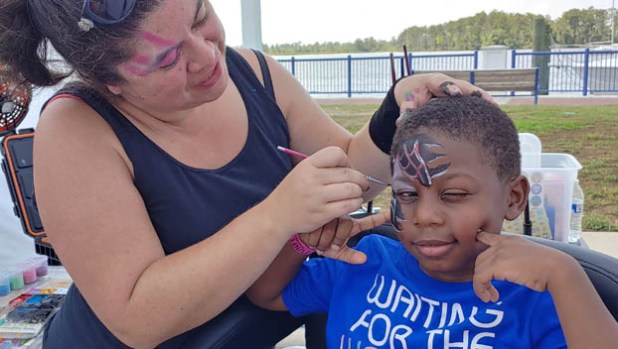 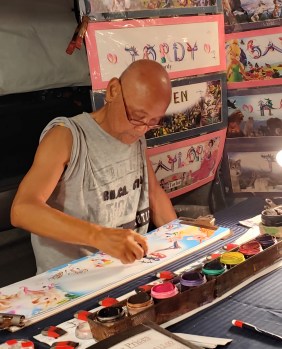 Customers lined up to have their names — or those of their loved ones — beautified with international style by this artist. (Karen Thiel) 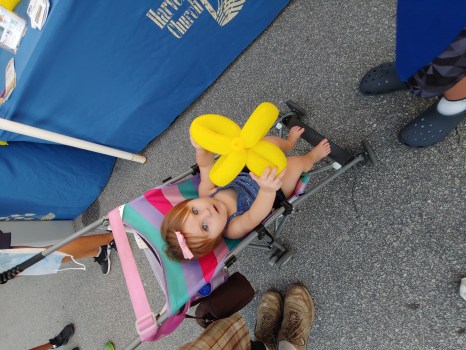 : This toddler is happy with the balloon just given to her by a member of Harvest Church, where volunteers shaped specially made balloons into a variety of designs. (Karen Thiel) 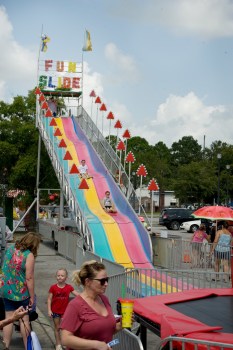 This slide was one of many amusements people could enjoy at the Summer Festival. (Meredith Loughlin)

Little kids strained to get close to a group of dogs as they joined hundreds of others crowding Washington’s riverfront last weekend for the Washington Summer Festival.

The owners of those dogs smiled, promised countless parents that they were safe to pet, and made instant friends among the toddlers in that group of people who turned out for the two-day event.

Vendors and participants said they were happy to mingle at this celebration, the first of its size since the start of the COVID-19 pandemic

Those who attended the festival braved intense heat; many of them carried around handheld fans, while others happily accepted cold water bottles from various vendors.

“It felt good to be back out in the community and see familiar faces as well as some new ones,” said Marcy Dunn, a vendor who has participated in the Summer Festival for most of the last eight years. “The chamber and their volunteers worked tirelessly to pull this off. Summerfest and the chamber are both assets to our community.”

Activity choices were as plentiful and varied as vendors. Pottery demonstrations at the Turnage, boat rides with the Little Washington Sailing School, “rubber duckie” races for the United Way, ukulele and drum circles at Mac Hodges Park, and concerts at the gazebo all weekend long were just a few of the attractions.

Several opportunities were also offered to assist groups that served Beaufort County residents during the pandemic. A “Stuff the Van” effort to collect canned goods for Eagles Wings Food Pantry was among the most popular.

The weekend was topped off by a celebratory fireworks display that drew a large crowd to the waterfront. Washington native Jennifer Evans arrived with two friends and four of their children to help continue her Summer Festival tradition.

“Last year was the first time I’ve missed it since I was a little girl,” said Evans, who has attended the event for more than 20 years. “We just all do things together and love to see our children laughing, playing, and having a good time. This event is a good sign that we are not scared to get out and interact again, that things are getting back to normal.”