‘A problem we can and need to fix’: DEQ investigating another Pamlico River fish kill 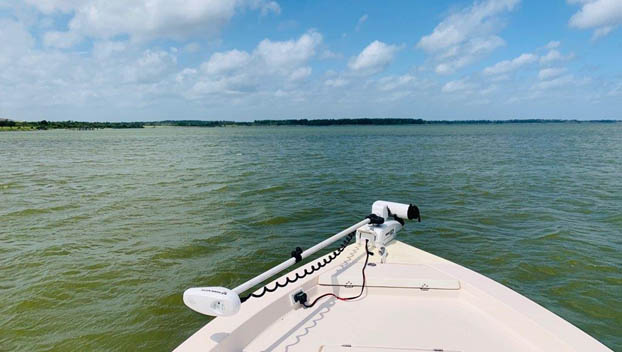 This photo taken on the Pamlico River, near the Nutrien property, shows how the algal bloom turned the water bright green. (Sound Rivers)

As the Department of Environmental Quality investigates another fish kill in the Pamlico River, this one caused by an algal bloom, Sound Rivers is urging the public to realize that such events aren’t natural and need to be remedied through increased awareness and funding from the state.

A fish kill, or a die-off, is an underwater anoxic event that causes a drop in fish populations.

“We don’t want this to be normalized,” Sound Rivers Executive Director Heather Deck said. “These are not meant to be normal summer events that just happen on the Pamlico, that we should just become accustomed to.

“This has been brought about by decades of nutrient pollution, of mismanagement of our water resources. And it’s a problem that we can and need to fix.”

The algal bloom currently under investigation stretches from South Creek to Hickory Point to Blounts Bay. The bloom has turned the water bright green.

Sound Rivers was first notified last weekend of a fish kill in Blounts Bay. Another call came in Wednesday from a fisherman moving toward Durham Creek who reported that the whole south side of the river was lime green.

Sound Rivers didn’t know roughly how many fish had been affected as of Thursday afternoon, but investigators reported seeing juvenile eels, spot, croaker, trout, bass and perch — a mixture of saltwater and freshwater species, which is expected.

So what caused this fish kill?

“It’s kind of a perfect storm — we had a very wet winter, bringing in lots of rain and water and nutrients and nutrient pollution coming off the landscape,” Deck said. “And then we’ve had enough rain events to do that during the summer. And then it got very hot in August, and there are still a number of days where there wasn’t a lot of wind.

“So these hot conditions, extra pulse of nutrient pollution along with these still conditions just leads to a perfect storm to grow algae in our river.”

The way algal blooms consume oxygen in the water presents a clear danger to aquatic life. The algae can also be harmful to humans, which is why Sound Rivers advises people to stay out of the water when a fish kill and/or algal bloom is evident.

Investigators don’t know how toxic an algal bloom is until they collect samples and run tests on them.

“These types of algae can produce toxins and have been known to in the past, usually not at levels that would cause severe problems for people, but it can cause some respiratory problems or other skin irritations, and can be very harmful to animals, especially dogs that may be drinking the water. So we always recommend to avoid the river when there’s an algal bloom going on, because we can’t rule out the possibility that there’s toxins.”

“(The legislators) need to hear more from people about the fact that we need to invest in the proper management of our water resources,” Deck said. “If you have any properties, be mindful of the runoff from your home — when you’re washing your car, you can do it on your lawn to avoid that runoff. Make sure you’re maintaining your septic tank. … There are a lot of little things you can do at home to make a difference, but also speaking to your elected officials that we need to invest in our natural resources.”