Patience pays off for Northside’s Godley 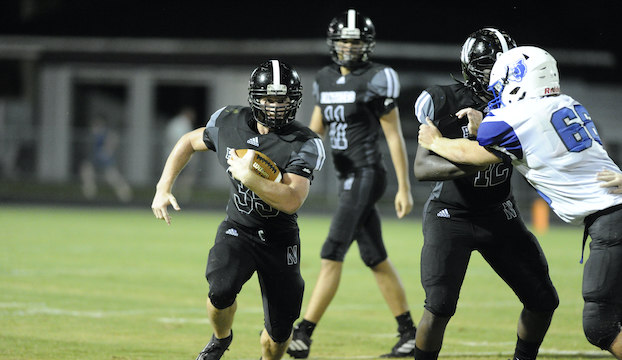 Northside senior Mitch Godley carries the ball against Camden County in the season-opener. Godley is the Panthers leading rusher and tackler through the first three games. (Ashely Vansant/Washington Daily News)

If there is a way to squeeze one more ounce of improvement during his senior season, Mitch Godley will do his best to figure it out.

The 5’8 180 lb. fullback/linebacker has broadened his game in all areas since joining the Northside varsity as a sophomore.

He’s patiently waited his turn to be the focal point of the Panthers run-oriented offense and two games into his final season, he’s handled the featured role quite nicely.

Powerful Zakkai Wilson rumbled his way to almost 1,000 yards during Godley’s sophomore year, then James Gorham outran the defense for over 1,500 yards and 23 touchdowns, most after a Godley block paved the way, during the Panthers spring run to the 1A state title game in Raleigh.

“He’s done whatever we’ve asked him to do since he’s been here,” coach Keith Boyd said. “He is more of a physical runner than James, but he can get to the outside. Mitch is pretty much where our offense starts this year and he’s been great so far.”

Godley opened his final fall with 173 yards on 15 carries and a pair of touchdowns against Camden County, then followed up with 135 and four trips to the endzone against North Duplin.

“I think I’m getting better every week, even though my yardage went down a little, but I wouldn’t get anything without the offensive linemen” Godley said. “I thank them, my coaches and God for helping me improve and pushing me to keep working so hopefully we can keep winning.”

Godley grew up in Washington and attended Bath Elementary. Pirates coach Tony Mirabella encouraged the seventh grader to try out for football and Godley didn’t pack it in after the first hard hit.

“I had played baseball up to then, but I had always wanted to try football,” Godley said. “Our first scrimmage was against Northeast (Elementary) and some kid popped me pretty good.  I got up thinking it would be fun to tackle somebody else that hard and it’s gone from there.”

Keifer Boyd, who is the Panthers starting quarterback, was among Godley’s teammates at Bath. That’s where his future high school coach first saw him.

“I knew he would help us at some point and it turned out to be during his sophomore year,” Keith Boyd said. “We put him in at linebacker at Riverside and he recovered a fumble and returned it for a touchdown. Things clicked for him after that and he’s still going.”

Godley and the rest of the returning Panthers worked through the summer after their trip to the championship game. After dealing with the stops and starts of the COVID-19 disrupted spring campaign, he hopes to keep going this fall with no interruptions.

“We were supposed to have a home game this week, but played away instead, but traveling is better than no game at all,” he said. “Our attitude as a team has been really good this fall and we are very excited to play. One advantage of playing in the spring is that we didn’t have time to forget the plays and the other stuff we learned. It was an unforgettable experience and really cool to play where the big dogs do (on a college field) and we are hyped to do it again.”

As one of the senior leaders, Godley leads by example as much as vocally according to Boyd.

“I tell these guys all the time that you build your own resume every day in practice, in games and in the classroom,” Boyd said. “When college coaches call, they ask about grades first, then character. Mitch is a perfect example of somebody they should follow.”