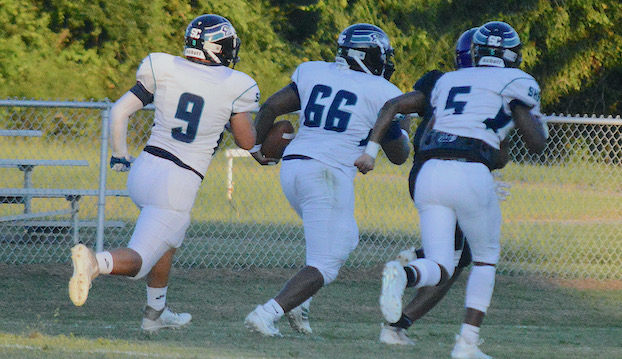 Southside’s Xavier Ham (66) scooped up a South Creek fumble and returned it 41 yards during the Seahawks 44-16 victory over the Cougars. Jamie Corprew (9) and Tequon Moore (5) provided the escort. (Steve Barnes/Washington Daily News)

The Southside High School football team is off to its best start in four years and a number of factors have contributed.

Despite a recent spike in COVID-19 cases, the Seahawks have played their first three games as scheduled, as opposed to last year, when there was major uncertainty surrounding when or even if the season would begin.

“We did the best we could under tough conditions and I wish it would have turned out better for last years’ seniors,” coach Jeff Carrow said. “It actually helped this group to have two seasons close together, but I feel bad for those who had their final year cut short.”

The Seahawks took a break after the spring season because most of the team was involved with track or baseball, but summer workouts started shortly after the school year ended in June.

“We had good off-season attendance and those who were here bought into what we wanted them to do,” Carrow said. “The older guys weren’t happy with the way the spring turned out and showed the younger ones how to do things.”

The summer effort has paid early dividends with a 32-0 shutout of North Duplin in the season opener at home followed by 36-14 and 44-16 road wins over Washington County and South Creek for the best start since 2017 when the Seahawks beat Ayden-Grifton, Dixon, Perquimans and Gates County to start 4-0. They finished 7-6 that season, for their most recent winning record, and lost to North Duplin in the second round of the playoffs.

This fall, Southside’s fortunes have turned thanks to an opportunistic defense that has recovered six fumbles (at least one in each game) and intercepted two passes in addition to getting consistent penetration into the opposing backfield.

Keywon Campbell returned a fumble for a touchdown and Kenjray Coffield intercepted a pass and ran it in for a score against North Duplin.

Tequon Moore had a long fumble return for a score in Week 2 at Washington County and the Seahawks scored after three of the four turnovers at South Creek.

“Our defense has done a great job of forcing turnovers and we’ve capitalized on them,” Carrow said. “They’ve either scored themselves or the offense has, which has been a big key for us so far.”

Southside has used big plays to take early leads in all three games and haven’t been behind through 12 quarters.

“We’re just more confident overall,” Coffield said. “We are practicing harder and our defense is more physical in games. We know we’ve gotten other teams attention with our good start, so we have to keep working to get better.”

Grabbing the lead early takes the pressure off the ground-oriented offensive attack and keeps the clock moving in their favor.

“It’s been a defensive team effort so far with guys doing their job to make a play or freeing up a teammate to make one,” Carrow said.

“Keywon Campbell, Chris Fleming, Jacob Taylor and Jamie Corprew have done the dirty work along the front and our secondary has done a better job of tackling in the open field.”

The Seahawks travel to Riverside Friday for a match with a former conference-opponent who is coming off a two week quarantine.

“I’m very pleased with what we’ve done, but I’m all about keeping these guys focused on our next opponent,” Carrow said. “Riverside will be another challenge and we’ll take it one game at a time. We knew we had some talented players and we’ve grown together as a unit. I think our program is back on track, but we still have to earn it on the field.”