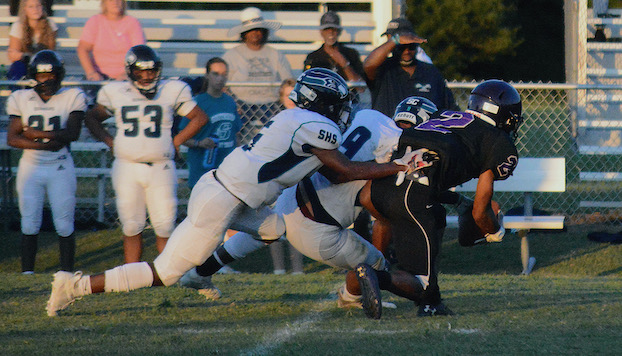 The Southside Seahawks took full advantage of being the only Beaufort County team in action Friday with a 44-16 rout at South Creek Friday. Northside lost, 49-7, to 2A Wallace-Rose Hill Thursday, while Washington and Pungo Christian Academy were idle.

Best of the Rest-Northside: Marcus Clayton scored the only touchdown on a 60-yard run and made a spectacular leaping one-handed reception of a Keifer Boyd pass. Kasey Alligood and Carson Clinkscales had seven tackles each with one for a loss, while Briley Cooper had six with two for a loss.

Southside: Kenjray Coffield had 75 yards rushing on five carries with a 35-yard touchdown run. Jacob Taylor had six tackles with one for a loss, while Chris Fleming added a pair of tackles for loss.

Three teams are back in action Friday as Southside travels to Riverside, Northside hosts South Creek and Washington is at Northampton County.