Demons return to the gridiron-first game since 2019 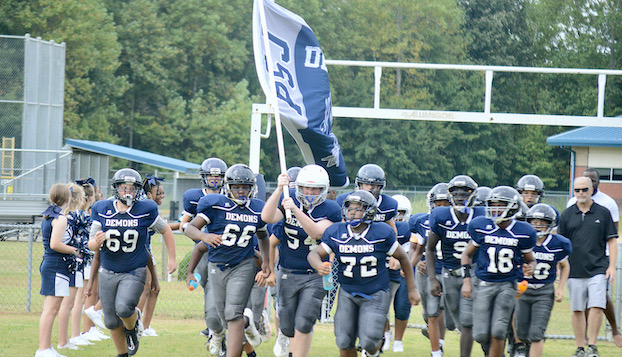 COVID-19 forced the Pitt County Middle School Conference to cancel all sports out of caution during the 2020-21 school year, so the 7th and 8th graders on both sides of the field were playing middle school football for the

“It was great to get on the field and hit somebody wearing a different colored jersey,” Demons coach John Cutler said. “Our players and coaches have waited a long time for this and it was fantastic to finally start our season.”

The campaign started slowly for the home team, but P.S. Jones regrouped quickly.

The Demons forced Pamlico into a fourth down and five situation on the opening series and after constant reminders from the sideline to watch the ball, so they wouldn’t jump offside, they promptly jumped offside to prolong the Hurricanes drive.

However, linebacker Calek Smaw recorded back-to-back tackles for loss, so the Demons took over on the Pamlico 32 yard-line.

Quarterback Jamere Biggs raced to the endzone on the first offensive play of the season and the rout was on.

Four plays later, Smaw sprinted 65 yards around the right side for another touchdown, giving the Demons three trips to the endzone in as many plays to start the year.

“We just put our athletes in the right position to do what they do,” Cutler said. “We feel like we have speed on the edge and an advantage up front with our offensive line, so we executed how we drew it up.”

The Demons added the final touchdown in the third quarter on a run from Brody Cahoon before Pamlico scored late.

“We are excited to finally have our entire team together,” Cutler said. “We’ve had different guys miss practice because of COVID and other reasons just about every day during the pre-season. We think we have a chance to have a pretty good season when everyone is here and today was a good start on proving that.”

The Demons are back in action Thursday at home in the conference opener against Aycock Middle School.