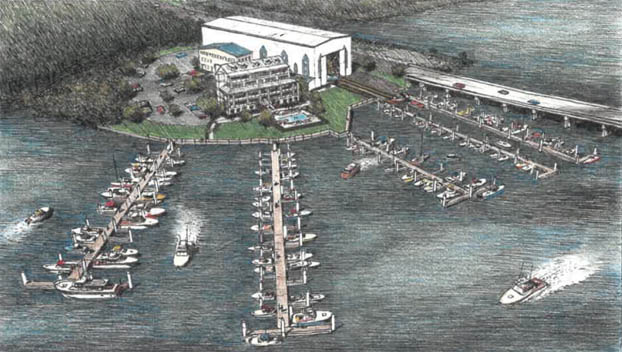 This rendering of the proposed Bridge Harbor Marina was included in supporting documents for requested city code amendments associated with the project. (City of Washington)

After much discussion about the project’s potential effects on the region, the Washington City Council on Monday approved a request from the developer of Bridge Harbor Marina to amend the city code in order to facilitate the construction of a dry stack boat storage facility and commercial marina.

Council voted 4-1 in favor of going along with the planning board’s unanimous recommendation to approve the request. Betsy Kane dissented, citing a need for more public input on the project.

While Monday’s vote was significant in terms of laying the project groundwork, City Manager Jonathan Russell noted that process of finalizing the project’s details and putting together a final package for City Council’s approval is still in its early stages. The next steps for the developers include appearing before the city’s board of adjustment to request a special use permit, as well as requesting any variances needed to complete the project.

The Bridge Harbor Marina project is slated for a property across the Pamlico River from downtown Washington, next to U.S. Highway 17 heading toward Chocowinity. The plans for the Bridge Harbor Marina project include five parts: the Bridge Harbor Clubhouse, 152 wet slips with boatlifts and three fuel docks, a 272-slip dry stack facility, a repair and office building attached to the dry stack facility, a wedding venue pole building, and a parking and boat launch and hauling site on the west side of the highway.

The property is located within Washington’s extraterritorial planning jurisdiction, which means it’s outside of the city limits but is subject to the city’s land development regulations. Mezzanotte said the developers have volunteered to have the property annexed into Washington so they can pay “our fair share in terms of taxes” to the city.

Mezzanotte said the project could bring a minimum of 100 jobs to Washington.

Russell said the city has helped the developers work with agencies such as the Department of Environmental Quality and the Army Corps of Engineers during the planning phases of the project.

During the public comment period Monday, several people came forward to speak either for or against the project. Those who supported it emphasized the potential benefits the project could have on Washington’s growing economy, particularly in terms of bringing more visitors to the downtown area. Those against the project explained their concerns about the lack of public knowledge about the project, how would affect the waterfront aesthetically, how it would affect traffic on the water, and what might become of the city if similar projects become a trend along the river.

Kane was the only City Council member to comment on the project before the vote. She said the public should have some more time to consider a project of this scale.

“I’ve been going at this for a couple years now, advocating for our city to have a completely supported vision and strategic plan for everything that we do over the long and the short term,” Kane said. “We don’t have that. We have a comprehensive plan that was done a long time ago.”

“I’ve seen this movie before. The politicians love a big trophy project,” Kane said. “… And visitors, visitors, visitors. Always, ‘Visitors will come to our town.’ We have like three city departments that do nothing but attend to the needs of visitors and tourists. And I love visitors and tourists, but what about our residents? What about our neighborhoods? What will this do for them?