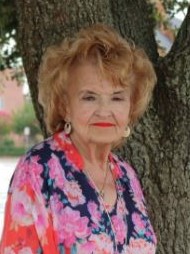 Peggy Ruth Jackson Nelson, 78, was called home unexpectedly on September 2, 2021.  A colorful celebration of her life will be held on Wednesday, September 8, 4:00 pm, in the Wilkerson Funeral Home Chapel.  A graveside service and entombment will follow at the Nelson-Congleton-Stevenson Family Cemetery near Farmville.   Family and close friends who wish to travel the distance to the cemetery are welcome for the continuation at the graveside.    The family will receive visitors at the funeral home from 2:30-3:30 prior to the service.

Peggy was born April 10, 1943, in Beaufort County to the late Robert Lee and Irma “Ruth” Barnhill Jackson.  In addition to her parents, she was preceded in death by her husband of 35 years, Lindsay Ray “Lin” Nelson and her two brothers, Louis and Elbert Jackson.

In addition to her immediate family, Peggy is survived by three of a group of five lifelong friends, Hilda Lane, Anna Kay Whitley, and Peggy Whitford.  (Ironically, both Peggy and the fifth member of “The Girls,” Nancy Douglas, passed away on the same day.)  She is also fondly remembered by her extended Stevenson-Rogister-Nobles family who so graciously “adopted” her, special friends Brownie Stancil and Dr. Cherry Johnson as well as by her ADK sorority sisters, members of the Red Hat Club, a number of her Farmville Central High School teaching buddies and students, and a vast circle of other friends and acquaintances.

Peggy was a 1961 graduate of Washington High School.  She graduated from East Carolina University, and completed her master’s degree in English at the University of Michigan.  As an English teacher for many years, Peggy positively impacted the lives of many young people.  The majority of her career was spent at Farmville Central High School.  She remained active in her sorority throughout her life, holding a state office for a time.  After retirement, Peggy was inducted into the East Carolina University Educators Hall of Fame.  This was particularly fitting because she valued education so highly.

Because she believed in living life to the fullest, Peggy enjoyed many activities.  Travel and day trips (especially to the beach), socializing with friends, decorating for Christmas (all year), nature walks, and spending time with her grandchildren were among her favorite pastimes.  Always spiritual, she attended both Hull Road Original Free Will Baptist and Jarvis Memorial United Methodist Churches in recent years.