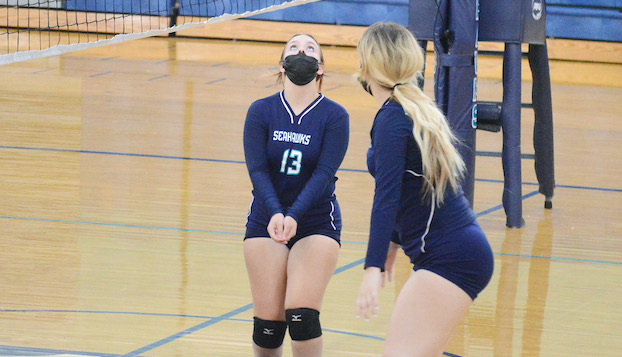 The Southside volleyball team is off to its best start since 2016 and has a chance for a winning record for the first time since then.

The Seahawks went 4-3 in their pre-conference schedule with a pair of victories over Washington County and one against North Pitt and South Creek.

The 2016 team started 6-3 and finished 12-9 with a loss to East Wake Academy in the first round of the 1A state tournament.

This season, as the program attempts to return to the post-season, the formula for successful chemistry so far seems to be two parts attitude combined with one part ability.

“We are just out here having fun playing a sport we love,” senior Laura Hodges said. “We like being around each other and enjoy working on our skills in practice. Coach Starkie is preparing us for life as well as teaching us volleyball skills. She wants us to be well-rounded and succeed off the court as well. She sets a positive tone and it’s definitely been a lot better than last year.”

The Seahawks struggled in all phases during the COVID-19 delayed and shortened 2020 season that didn’t start until mid-November and ended in late December with an 0-8 record, with all but one match ending in a 3-0 sweep.

“We couldn’t put anything together and it was really tough on the girls,” coach Atyana Starkie said. “We were quarantined three times during a two month season, including once for two weeks at the beginning. The kids weren’t in school and it was hard for some of them to get here every day for practice. It’s not something I want to go through again.”

Starkie, who graduated from Southside in 2011 after a four-year varsity volleyball career, is in her seventh year as the head coach. She wants her players to have a winning experience as she did and thinks this group has a chance.

“Moriah Jones and Alexis Whitehurst are seniors along with Laura (Hodges) and they’ve done well leading the team,” Starkie said. “Madison Sneed is our junior setter and she’s my coach on the floor. She’s the one who communicates with the others and starts our offense. We have worked hard in practice to overcome our lack of height with solid fundamentals and I think its paid off so far.”

Eight players make up the active roster, with one out with an injury. The small squad leads to plenty of playing time as six are on the floor with two on the bench.

Despite the mask mandate inside Beaufort County schools, the Seahawks have prospered while heading into a more competitive conference schedule with matches against traditional powers Pamlico County, who has won 26 consecutive league matches, and county rival Northside, who made the playoffs with a late surge last year.

Riverside, another traditionally strong program, was transferred out of the conference in the latest realignment.

“We’re just trying to improve from match to match and I think we’ve done that so far,” Starkie said. “We need everybody to be at their best every match and we’ll take it from there. I want these girls to have a successful experience and to learn to love the sport. Our attitude and passion is there and we’re continuing to work to improve.”