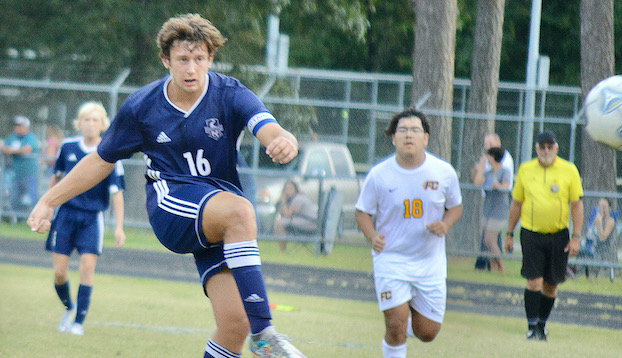 Senior Ridge Zerniak hits the top right corner of the net from 30 yards out for one of his two goals against Farmville Central Monday night at home. (Steve Barnes/Washington Daily News)

No matter the conference, the Washington High School soccer team usually finds a way to capture the league crown.

Since 2013, WHS has gone 82-4-1 in four different leagues and opened the latest conference season with an 11-3 rout of out-manned Farmville Central Monday night at Wagner Stadium.

Greene Central is the only team to beat the Pack in league play since 2017, winning 5-4 in 2018 and 5-3 a year later. The Rams are currently the top ranked team in 2A according to MaxPreps with a 10-0 record, including a 3-0 league slate.

The Pam Pack (4-3-1, 1-0) visit Snow Hill Wednesday night in an early preview of what the rest of the fall could bring.

“They have had a strong program for a long time and have looked great so far this year,” WHS coach Jim Kozuch said. “We need to be at our absolute best to compete with them and Monday was a good prep game.”

Seniors Bryan Martinez, Hunter Moore and Ridge Zerniak are the veterans with nine juniors, one sophomore and one freshman also on the varsity roster.

“We have made steady progress and I’m hoping our tough non-conference schedule will prepare us for our league,” Kozuch said. “We’d like to make another playoff run and having a full schedule of games will hopefully give us the time we need to keep improving.”

Washington lost to D.H. Conley, J.H. Rose and New Bern in the pre-conference schedule and Kozuch expects all three to qualify for the 3A and in the Bears case, 4A playoffs.

Monday night, the Pack turned a 4-1 halftime lead into an 11-3 runaway against the Jaguars, who dressed only 12 players and saw their goalie go out with a head injury after a collision in the first minute.

“It was good to get some of the JV guys out there against a varsity team,” Kozuch said. “There is a difference with regard to size and speed and our young guys competed well. They mixed well with our varsity guys, passed the ball very well and communicated effectively. They also put it in the back of the net a few times, which is always nice to see.”

Last season finished in late March after a COVID-19 induced delay. That senior laden squad completed a 13-1 campaign with the first loss coming to Richland in the third round of the playoffs.

Kozuch thinks the short turnaround to a normal fall schedule helped his returning players stay in shape, but says each team is different.

“We are a little less experienced and have different skills,” he said. “We are still learning to play together and everyone is not quite in sync yet. We are very athletic and can create some tough matchups for our opponents. Greene Central will be a huge test for us and we’ll go from there.”