‘I made that canvas my world’: Jackson recognized for artwork 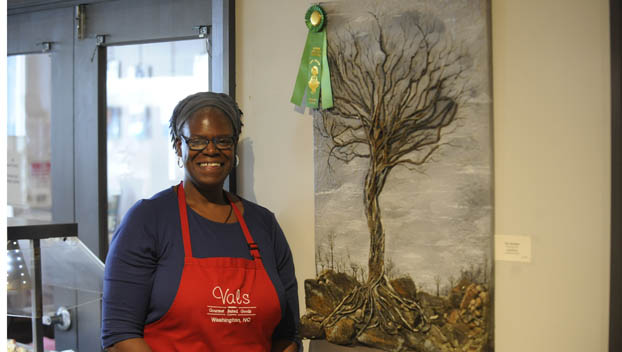 A lesson from Bob Ross helped inspire Val Jackson to create an award-winning piece of art.

Ross, the late prolific painter who garnered millions of viewers and inspired many to take up art through his TV show, The Joy of Painting, frequently encouraged students to make each painting their own: “This is your world,” he once said. “You’re the creator. Find freedom on this canvas.”

“So I made that canvas right there my world,” Jackson said, pointing to a piece of art hanging on the wall in her bakery, an acrylic and mixed media image that garnered “viewers’ choice” honors at the Ayden Collard Festival earlier this month.

Washington residents knows Jackson as the namesake of Val’s Gourmet Baked Goods, the shop she runs alongside her husband Arthur in downtown Washington. Most of her time and energy goes into the bakery, but when she finds time to focus on art — typically one day a week — Val enjoys exploring new mediums, watching tutorials and improving her artistic abilities.

Val said she enjoys the creative process involved in baking, and artwork gives her another way to express that creativity.

It’s a growing passion that started with a gift.

“My son bought me a paintbrush set and some palette knives for Christmas one year,” Jackson said. “A long time ago we were watching Bob Ross, and I said if I ever get some canvas I’d just go for it and see what I could do, because he made things look so easy.

“So when my son got me that brush set, I just went for it.”
She soon began to build her identity as an artist, ironing out some of the characteristics that define her paintings. One of the main characteristics is texture.

“I like texture; I like to feel what I’m doing,” Jackson said. “So even if somebody was blind, they could feel the art and see what it is through their hands. That’s what I really like about it.”

The piece that earned viewers’ choice honors at the Collard Festival was inspired in part by a YouTube tutorial.

“The guy did something similar to mine,” Jackson said. “To me, he didn’t make it look realistic. And I wanted to do that. So I painted in a different color, I extended branches beyond the strings of the tree, painted some more trees on the bottom and painted my rocks to actually look like rocks.”

Jackson said she was “sitting on pins and needles” while waiting for the contest results.

“I knew that they had judged the art, and I wanted to see if I had gotten a ribbon or anything. So I went there and realized I didn’t have a ribbon at all. The judges had already marked first place, second place and third place.

“… But the day we had to go pick up our paintings, the lady said, ‘Surprise, surprise, you got viewers’ choice.’ I was very, very excited. I put my heart and soul into that one.”

Jackson plans on continuing to expand her artistic pursuits while still juggling that hobby with her duties at the bakery.

“I’m learning along the way,” she said. “My next adventure might be sculpting on canvas. But I’m not sure.”