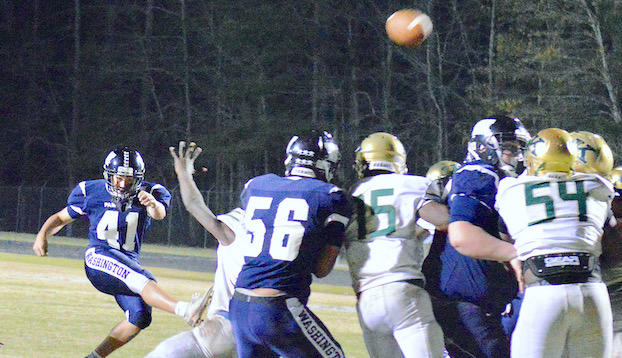 Ridge Zerniak has been kicking some kind of ball since he was four years old and doesn’t plan to stop until there aren’t any more kicks to make.

Add in a few long irons, chip shots, base hits, some middle distance runs and three pointers and you have a well-rounded four years as a Washington High School athlete.

Soccer came first, then baseball. He picked up a basketball at some point, then took up golf and football as a middle schooler and has stayed with them as much as he can through high school.

“I’ve just always liked to play,” Zerniak said. “My parents signed me up for Optimist soccer in the Washington Youth League when I was four and I’ve been doing something ever since.”

One of his teammates that spring was future Pam Pack quarterback Hayes Pippin, who talked Zerniak into playing football when both went to P.S. Jones Middle School. He started at linebacker, then found himself handling kickoffs as well.

Currently, Zerniak is spending his last fall season bouncing between the Pam Pack football and soccer teams. A soccer match is the top priority followed by a football game, then soccer practice. He joins the football team whenever possible for a while on Tuesday and Wednesday for special teams practice.

“He’s with us for about 20 minutes both days if soccer isn’t playing and I’ll take it,” football coach Perry Owens said. “He’s one of those old-school all-around athletes who can play any sport. He has been just about automatic on field goals from 30 yards in, which takes a huge amount of pressure off our offense to not have to go for it on fourth down all the time. He’s cool under pressure and came up big for us a couple of times in the spring”

There was no bigger kick than in the conference title game against Kinston back in April.

WHS trailed by a point with 14 seconds left with a trip to the playoffs hanging in the balance. The season would end right there if Zerniak missed, but he drilled it down the middle and the Pack went on to win, 50-49, in overtime.

“I was nervous on the sideline, but I felt confident once I stepped on the field,” Zerniak said. “None of us knew we weren’t going to the playoffs if we lost. I always try to look through the uprights and find my target in the back and everything worked out.”

Soccer is just as important as Zerniak is trying to help the Pam Pack win the conference title for the fourth time in his four years. The stocky left back is one of three seniors coach Jim Kozuch counts on for leadership and stability.

“He’s our field general and is very passionate about soccer,” Kozuch said. “He’s played the sport a long time and knows what he’s doing out there. He’s been great to coach and very fun to be around.”

Zerniak plays basketball in the winter and golf in the spring and also spent last spring on the baseball team. He’s also been a part of the Pam Pack track program.

“I’ve tried to take full advantage of my time here because it will be over soon,” Zerniak said. “I want my teams to do well and hopefully we have more success ahead. Playing helps me manage my time better and it’s been a lot of fun.”

Zerniak plans to attend East Carolina or the University of North Carolina in the fall with a major in physical therapy.