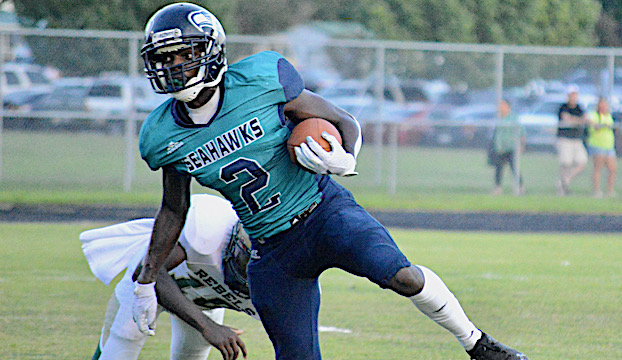 Southside returned from a two week break with a dominate performance on both sides of the ball in a 44-7 rout of Swansboro Friday night at home. That coupled with losses by Washington High School and Pungo Christian gave the Seahawks the top three spots. Northside had the night off.

Best of the Rest: Southside-the defense recovered another fumble, giving it seven in four games with at least one in each game. The five interceptions against Swansboro makes seven as well for a total of 14 turnovers forced in the first four games. Senior Keywon Campbell ran for 86 yards on 10 carries, while Tequon (Tater) Moore had 87 yards on nine attempts. Jamie Corprew led the defense a pair of solo tackles and three assists, while rushing for 42 yards and a touchdown. Tight End Shawn Gerard caught Walker Hill’s only completion in three attempts for a 14 yard touchdown. Alex Moore also scored a touchdown.

Washington: Senior running back Terry Moore scored the Pam Pack’s only touchdown on a 35-yard run in the first quarter in the 26-7 home loss to West Craven in the conference opener. Moore finished with 67 yards on 11 carries. Junior Jonathan Richardson led the defense with nine solo tackles and 11 total and also recovered a fumble. Junior Koby Munday totaled 11 tackles, seven solo while Gabe Davis had 11 with seven solo. Junior Jonathan Carter intercepted a pass in the end zone, while Austin Waters blocked an extra point attempt.