Off to a running start: Terra Ceia builds a program from the ground up 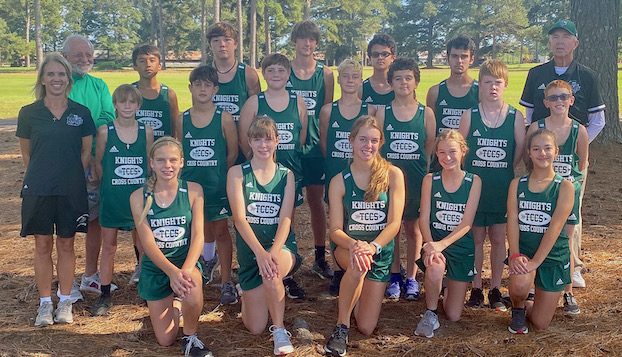 The Terra Ceia Christian School cross country team has put its best foot forward this fall despite being the youngest team in the Tar Heel Athletic Conference.

The Knights gained five runners from the programs first year in 2020 and are up to 17 this fall, with sophomore Brayden Cutler being the veteran. Freshman Dustin Carrow is the other high school runner with 15 middle schoolers making up the rest of the roster.

“We are such a small school that most of our high school athletes are already playing soccer or volleyball,” coach Brandi Holland said. “Rather than have them bounce back and forth with us and their other sport, we decided to build with middle school runners and improve from there.”

Holland teaches high school history at TCC and has completed a number of 5K races and half-marathons.

“I was Coach Bob’s unofficial assistant at Northside until we started our program and when he became available, I couldn’t let his talent just sit there,” Holland said. “He has been such a huge help to my son and many other runners at Northside over the years that he knew he could help us as well.”

It’s been quite a while since Girani has coached sixth and seventh graders, but he’s enjoyed the season so far.

“It’s fun to coach them when they are just getting started with running,” Girani said. “It’s a sport that any kid can participate in and they are at that formative stage where they listen to everything and get so excited when they improve. That’s been the fun part for me.”

The Knights run against Pungo Christian, Lawrence Academy, Northeast Academy and Ridgecroft and won their first meet earlier in the season.

“I wanted to try a sport this year, but I’m not really into basketball,” sixth grader Macey Woolard said. “Running is more fun than I thought and I like it so far.”

The Knights started pre-season workouts August 1 and practice most weekdays when they don’t have meets. Even though they have mostly middle school runners, the Knights run 5K (3.1 mile) meets like any other varsity team.

“It was hard to run that far at the beginning, but I wanted to try,” seventh grader Coby Alligood said. “I really like it now and I’ll stay with it.”

Holland is pleased with the progress her runners have made and knows the sport can have a lasting effect.

“I’ve already seen their confidence grow,” she said. “It helps build a stronger mindset and will help them through the tough times as they get older.”

However, eighth grader Aidan Parsons has a more immediate and practical reason for being part of the team.

“I’d be doing chores if I went straight home after school,” he said. “This is way more fun than weed whacking, loading the dishwasher or cleaning my room.”