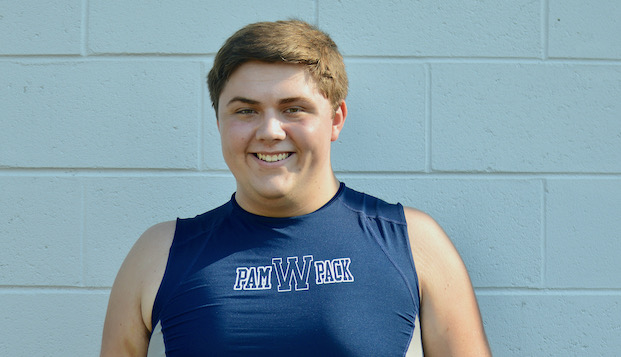 Pam Pack senior offensive and defensive lineman Wheeler Johnson is a member of the National Honor Society and will attend The Citadel in Charleston, SC next fall. (Steve Barnes/Washington Daily News)

6’3 275 lb. senior Wheeler Johnson is a big part of the Washington High School offensive and defensive line. He also throws the shot put in the spring and is a server at Backwater Jack’s in Washington He’s a member of the National Honor Society and has been accepted to The Citadel in Charleston, SC.

Wheeler: Honors U.S. History with Coach Heck. I’ve always been a history buff and I’ve learned a lot in that class. I didn’t realize the Great Depression affected so many people to the extent that it did. It’s amazing to me that after the Roarin’ 20’s, things were so difficult so quickly for most of the country.

Wheeler: When we beat Kinston for the conference championship in the spring (50-49 in overtime). We came from way behind in the second half to win and everybody stormed the field after the last play. That was the greatest night of my life celebrating with my teammates.

Wheeler: John F. Kennedy’s quote of “Ask not what your country can do for you, but what can you do for your country” has stuck with me for a long time. I want to serve and two of my great uncles went there along with a couple family friends.

Wheeler: (Actor) Christopher Lee because he was in Lord of the Rings and a villain in a James Bond movie, Elon Musk because he would have amazing insights and Teddy Roosevelt because he was not only a great President, but he had a very interesting life before politics. I would serve grilled chicken stir fry with peas and carrots, twice baked potatoes and Shirley Temples.