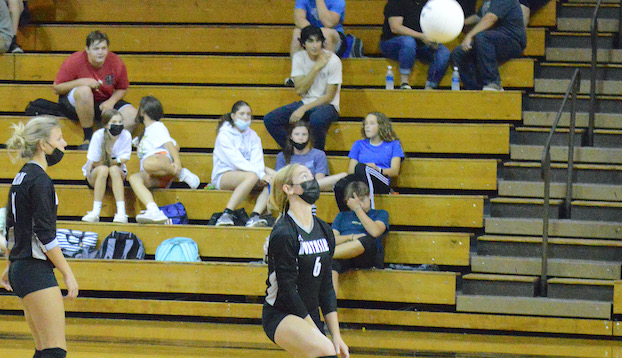 Northside’s Hannah Black returns the ball against Jones Senior earlier this season. The Panthers are second in the 1A East rankings that will determine playoff seeding. (Steve Barnes/Washington Daily News)

Anything beats drawing names out of a hat.

Everything about the 2020-21 high school sports year was off kilter because of COVID-19 but determining playoff seeding by lot might have been the oddest occurrence.

Farmville Central rolled to another 2A state basketball championship without a post-season home game, despite winning their conference and the top rank in every poll.

College basketball fans should be familiar, since the NCAA has used it for years in determining the basketball tournament brackets.

“It’s good to have something clearly defined, but we won’t know how effective it is until the end,” Washington football coach Perry Owens said. “We have losses to two quality opponents (Northern Nash and West Craven) which should help us, but right now teams who are undefeated against soft opponents are ahead of us in the rankings. We’ll wait until the end of the season to see how it shakes out.”

32 teams will make the East playoffs in 1A and 2A, so theoretically, a team in the top 32 of the RPI will get in.

Here’s how things stack up for the county teams after the second set of rankings were released Thursday:

Football: Washington is 26th in 2A, down from 14th after the West Craven loss. Southside is fourth in 1A after a 4-0 start, while Northside is sixth at 4-1. If both continue their success, they should have home-field advantage through most of the playoffs.

“I think it’s an improvement and hopefully will show our team’s strength,” Northside volleyball coach Michelle Leathers said. “It’s easy to just look at a team’s overall record when they do the seeding, but then not look any closer to see who they’ve played and how strong the conference is. It will help the seeding committee see that we’ve played some good teams, which should help our seeding and it will help coaches schedule better non-conference matches in future to help their seed.”

“You get a better seed if you win your conference,” he said. “You still make the playoffs if you finish second or even third, but you are probably on the road after the first couple of rounds. I always try to play bigger, better schools like D.H. Conley, J.H. Rose and New Bern to prepare us for our conference season. Win or lose, it helps us.”