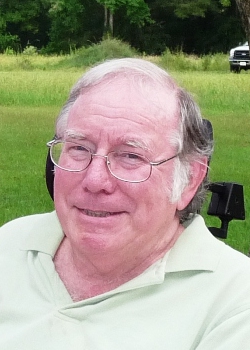 Richard Wells “Rick” Adams, age 74, passed away suddenly at Duke University Hospital on Tuesday evening, September 21, 2021. Rick and his wife, Mary Ellen, recently moved to Hillsborough NC from Bath NC.
Rick was born in Nyack NY to Francis Humbert and Virginia Wells Adams. He was the middle child between two sisters. He is survived by his wife, Mary Ellen, his son, Chris Adams, his wife, Irina, and grandson Matthew Adams of Chapel Hill; his son Justin Adams of Bali, Indonesia and his mother, Virginia Wells Adams of Schaghticoke, NY, who is 101. Also surviving are his sisters, Beth Adams-Smith and husband Richard of Mystic, CT, and Carolyn Griffith Hampson and husband Maurice of Richmond, VA; his brother-in-law John Schwab (Houston, TX; and numerous cousins, nieces and nephews. Rick was preceded in death by his father, Frank Adams, and three devoted CCI dogs that brought him much joy, Hester, Flynn and Buff.
Rick attended high school in Glen Rock, NJ and went on to graduate with a degree in Economics from the University of Richmond, where he met Mary Ellen. Vietnam was in full swing then, so he joined the ROTC and graduated with the Distinguished Military Student Award, allowing him to pick his station. He went to Germany as a 2nd Lt with his wife Mary Ellen and their first child. They travelled around Europe in an Alfa Romeo. He built a throne of US dollar bills for fun. For some reason the military didn’t let us keep that picture of Chris sitting in that throne…..
Then came the diagnosis of MS. Rick faced the news with determination to live out a full life. He found his way to an experimental drug and became in his words “a white rat” helping study what is now Copaxone. It helped change the course of his illness and made more room for his extraordinary life.
A love of the outdoors, water and boating were a part of Rick’s life from childhood. He raised his sons, Chris and Justin, boating and camping from the time they were toddlers. Rick built a summer cabin, “The Boat House,” next to his mother’s cottage on the upper Hudson River in the Adirondacks so that his family could enjoy a house on the water with extended family. Summers in Connecticut were spent cruising from Long Island Sound to the Maine coastline. He was determined to continue to boat until he could no longer. With a subtle sense of humor, he named his boats Tenacious, Elixir and Indian Summer.
Rick was an achiever against all odds and a successful entrepreneur. He co-founded an international trade business selling spare parts for heavy mining equipment around the world from offices in Norwalk, CT. He once imported hundreds of cases of wine from Chile, a crazy story. Later selling the business and retiring to Bath, NC to live on the water.
A Celebration of Life will be held at St. Thomas in Bath, NC at a future date. We give heartfelt thanks to the VA, for providing support and medical care for many years, and to his caregivers, Leisa Norris, Lucy Slade and Hope Donahue. The family is requesting that memorial donations be made to either the Disabled American Veterans, Canine Companions for Independence (CCI), or Wounded Warriors.
Throughout his life, Rick was generous, kind, courageous and determined. He faced the challenges of his life with humor, grace, and a fighting spirit. He will be greatly missed. Please share your memories with us and learn more about Rick at www.mykeeper.com/profile/RichardAdams/. It would mean a lot.
Condolences may be shared at CremationSocietyNC.com