‘I’m in my element’: Edwards, Campbell team up to revitalize Main Street planters 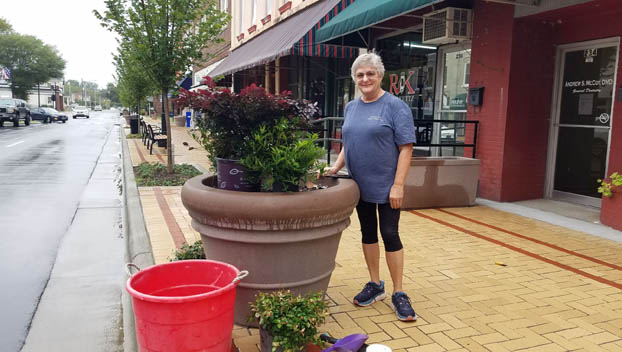 Rena Edwards stands next to one of the Main Street planters she’s been revitalizing. Edwards said she saw the project as her “ace in the hole.” (Contributed photo)

The planters along Main Street in downtown Washington are getting spruced up, thanks to the efforts of Rena Edwards and other volunteers.

Edwards noticed that the plants along the recently-revamped street were “pitifully” planted,” so she took action. With help from the City Of Washington, realtor Scott Campbell and local sponsors, she took action.

“I feel like that’s my ace in the hole, because I feel like it can only get better,” Edwards said.

After talking with city officials about redoing the potted plants, Edwards saw her initiative take off when she ran into Campbell while visiting a local store.

“It was just total luck that I walked in the store complaining about what the pots look like, and Rena was working on trying to fix the pots,” Campbell said.

The two paired up to work on their cause, with Campbell handling the administrative duties behind it and Edwards focusing more on the planters themselves.

One of the first things on Campbell’s list was finding a source of funding. Many local sponsors were willing to contribute to the project.

“The city is always struggling for funds — that’s just the nature of municipalities, especially in this time,” Campbell said. “So I was pretty aware that if we approached them and said, ‘How about you guys give us all the money we need to do these the way we really need to,’ they’d balk.

“So I went a little bit the other way and said, ‘Hey, we have a whole bunch of people willing to write a pretty good sized check toward getting these pots done.’ And they said, “Great, let’s do it.’”

Within about three days, they had individual sponsorships for all of the 15 pots.

Sponsors pay $250 per year to cover their specific planter. That money will help Edwards and other volunteers change out the pots three times a year with seasonal fillers.

Each pot has a “hardy” plant that will stay year-round.

“There’s been a lot that the city has done in the past year under the dark umbrella of COVID happening,” Campbell said. “They’ve done an awesome job on the streetscape. Everything has really come together. You could not have hoped for a better process and a better outcome.

“Occasionally some things kind of fall off the radar screen of taking care of, and the planters are one of them,” Campbell added.  “They were low priority for the city, but they were high priority for us, so we’re going to make it better.”

“And we want to make Mac (Hodges) smile up there,” Edwards added, referring to Washington’s beloved late mayor.

Once this project is finished, Edwards and Campbell are looking at similar initiatives in nearby areas — including the intersection of Main and Gladden Streets, or what Campbell calls the “gateway of Washington.”

“I’ve had a ball out there. I’m in my element, digging and meeting people,” Edwards said. “It’s just been great. I’m really grateful for the opportunity.”