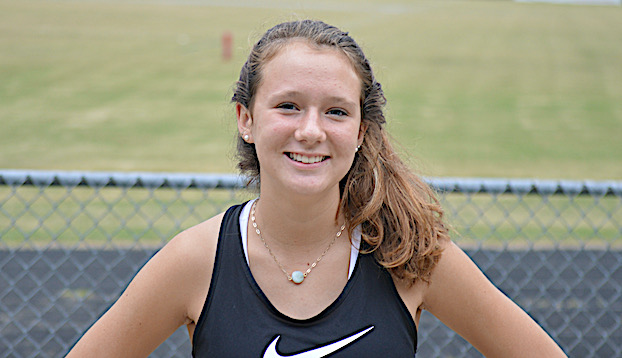 Washington High School sophomore cross country runner Hailey Broadwell has finished first or second in all her meets this fall. She also runs the 800, 1600 and 3200 meters for the Pam Pack track team in the spring.

Hailey: My mom ran cross country in high school and at East Carolina University for a couple of years, so she encouraged me to try. I was born in Greenville and moved to Washington for seventh grade at P.S. Jones. I won my first meet, which felt really good, so I’ve been competing since then.

Hailey: It makes me feel good while I’m doing it and after I’m done. I enjoy being part of a team and running as a group. We encourage each other and pick each other up after a bad race, but we also compete with and push each other to go faster. I try to set a new personal record every time I run and it’s a great feeling when I do.

Hailey: I trained really hard the summer before my freshman year and it paid off. I still run five or six miles on my own on weekends, but I haven’t worked as hard as I did last year. I need to pick up my pace to get ready for regionals and the state meet.

Hailey: Probably forward, so I could see what I’m going to be doing a couple of years from now. I have no idea where I want to go to college and if I want to run, so it would be interesting to see how it turned out.

Hailey: Mary Poppins, because she is very witty and has a way of talking that makes her sound really smart.