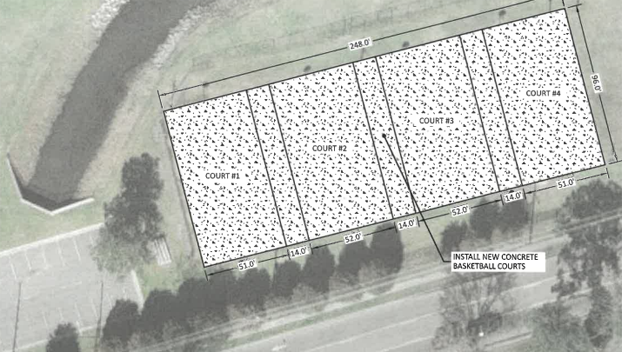 This is part of the plan the city has provided for the replacement of the Fifth Street basketball courts. (City of Washington)

The department is also seeking approval of a purchase order not to exceed $196,000. That total is based on informal quotes to replace the courts. The projected costs include $170,000 for removing and disposing of the current courts and putting in new concrete; $3,000 for painting new lines; $15,000 for new basketball goals; $7,000 for new bleachers; and $1,000 for night lights.

Monday’s meeting will begin at 5:30 p.m. inside the Washington Municipal Building. The city is mandating masks for everyone in attendance. Other items on the agenda for Monday include:

·      A presentation from Hannah Gill of University of North Carolina’s Building Integrated Communities Program. Last year UNC selected Washington to participate in the BIC initiative, which, according to supporting documents, “aims to understand the experiences of immigrant residents and develop recommendations for City leaders to consider that support the integration, wellbeing, and leadership development of community members.” Gill will present the findings from Washington’s community assessment.

·      A request from the Washington Tourism Development Authority to serve alcohol at Festival Park for the Cycle NC Coastal Ride, which is slated for Nov. 4-7. The request is to allow alcohol inside the Festival Park campsite throughout the event. The Tourism Development Authority says it will host one event where alcohol is served, a reception for cyclists at the Estuarium on Nov. 6 from 4:40 – 7:30 p.m., but they want alcohol to be allowed in Festival Park for the entire course of the event because “they tend to have it anyways and this action will allow police services to assist with the event in other greater needed capacities as opposed to also monitoring alcohol and writing tickets inside the camping area at Festival Park.”

City Council will go into closed session near the end of the meeting.